“In 5 years, the fields will be mechanised” 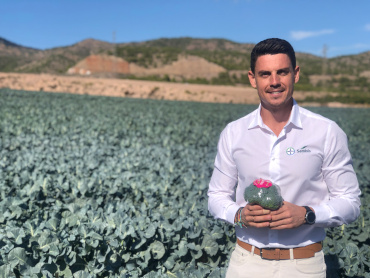 Seminis is extending its range of brassicas in view of the sector’s next trend: harvest mechanisation

Countries such as the USA, Canada and the United Kingdom are already implementing the mechanised harvesting of broccoli. A reality that will still take some time to reach Spain, although not too long. “The Spanish fields have to adapt to these crops, but I think that in a maximum of 5 years we will have prototypes working in this way,” affirms José Guirado, Brassicas Iberia Market Development Manager at Bayer. Under Bayer’s brand, Seminis, the company has been trying to get ahead of this scenario for a decade now, developing 100% improved lines with raised heads and clean stems to make a potential mechanised harvest easier.

As a result of this work, they launched Shard and Titanium, now consolidated on the conventional broccoli market for fresh sales.

Parallel to this, they have specialities such as Skytree for fresh florettes, a format in great demand in the Scandinavian countries due to their convenience, making cooking easier for consumers. Another speciality is Bellaverde, of the Tenderstem type. “Bellaverde is very versatile for cooking. It is mainly produced for the United Kingdom, where it is marketed in 200 g trays,” Guirado details.

A new development for industry

As a new development this year, Seminis is presenting a broccoli variety for processing, Andersia, focused on production areas for industry (the Ebro Valley and Extremadura), but that may also be marketed fresh in these areas where consumers are used to larger-sized heads. Andersia is for August plantations (early cycle in the region); its significant utilisation of the florettes make it stand out, along with a very good tolerance to fungal diseases such as alternaria, an important problem in early harvesting of crops in the Ebro Valley and Extremadura.

In the cauliflower segment, this year Seminis is continuing to promote varieties of the Curdivex type, such as Marmorex, the first one they introduced to Spain, with a gene that keeps the head white even when the sun shines on it, lengthening its lifespan in the fields, during marketing and on the supermarket shelves. These materials concentrate harvesting and produce very compact, heavy pieces.

In addition, within the cauliflower line, the new variety this year is Subasio, adapted to the Ebro Valley, Extremadura and Western Andalusia. The variety, for 120-day cycles, has an erect and vigorous plant, which protects the head against extreme winter conditions. With very good quality, Subasio stands out due to its compact head and for offering a grouped harvest, as well as double aptitude for marketing fresh and for industry.

All of this may be seen this year during some new open days that will be held for the first time: the Brassicas Winter Days, which will take place in week 6-7 (February, 2022) in a demonstration field in Totana. There, visitors will be able to see first-hand material for the local and international markets in a crop that is becoming more popular, brassicas, where the brand Seminis enjoys a good ranking with a growing market share, year after year.

PrevVellsam: nutritional solutions in all phases
Unexport, going for 100M€Next
YOU COULD ALSO BE INTERESTED IN