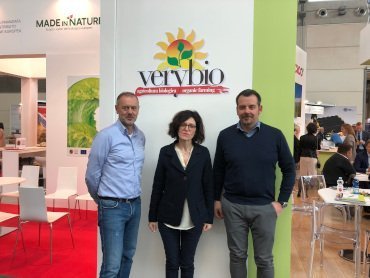 In just 4 months it has increased invoicing by another 20%

The brand VeryBio is making a space for itself in the ecological segment. From January to April this year, Veritas Biofrutta, a subsidiary of the Mazzoni Group has increased its invoicing by 20% and it foresees reaching 16 million euros compared to last year’s 13 million. An important step in its rising evolution (its annual growth is measured in two digits) since the parent company, Mazzoni, started its venture into the bio sector back in the year 2000. This increase in sales is behind their strengthening of the team with a new member, Nicola Mastronardi.

For Antonio Cogo, Sales Manager at Veritas, one of the strategy’s success stories is the work with close-ended programmes, a chapter that makes up 70% of its volume and it is virtually completely devoted to export, serving European distribution chains. Accordingly, France is its main destination with 40% of the sales, followed by Germany (15%), Holland, Austria and other countries from northern Europe.

Its own production is one of its next milestones. This year they have added 120 hectares of surface area on which they are growing seedless watermelons, potatoes, carrots, as well as cereals and legumes. “The aim is to strengthen the control of the production, which will allow us to homogenize the quality of the produce for all our suppliers even more.”

Another of its new developments is the company’s commitment to biodynamics. After finalising the attainment of the Demeter certificate, they foresee starting to market their first fruit and vegetable with this stamp in this year’s autumn campaign.

One of Veritas’ main assets is its logistics network and the synergies created thanks to the fact that it belongs to a group of the standing of Mazzoni. “Not only do we benefit from the sales relations, but we also can offer the top guarantees and certificates on the market”. Aware of the demands of the producers they work with, they establish a “loyalty” relationship with them and the company has a “fair price” policy. An essential aspect, which they manage by aiming the sales at different channels (hotel and catering trade, supermarkets, schools…) depending on where the best prices can be found.

PrevAmela® merging East and West
‘Dolcetto’ pineapple and ‘Chiccosa’ pomegranate, the latest from BrioNext
YOU COULD ALSO BE INTERESTED IN