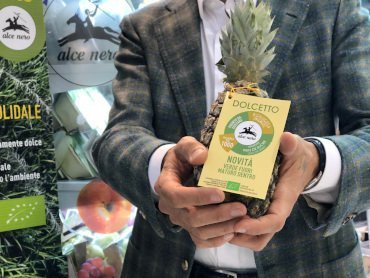 With an annual turnover of 76 million euros and a volume of 43,000 tonnes of fruit and vegetables, Brio is one of the benchmark companies on the Italian ecological farming scene. Established in 1993, and a member of the Alegra Group since 2014, it has become the keystone of Apoconerpo for the ecological segment. Brio was present at the latest edition of Macfrut to display its extensive offer of organic fruit and vegetables for I and IV range with the brand Alce Nero (the best known bio brand in Italy, with a 19% of awareness amongst ecological food consumers.) Amongst its latest developments, there are two new fresh 100% ecological vegetable-based soups: the ‘Vellutata delicata’ (peas, fennel, kale and leeks); and the ‘Summer minestrone’ (with carrots, celery, courgettes and beetroot), presented in the individual preparations that may be eaten hot or cold and are ideal for the summer due to their lightness. The salad with cherry tomatoes and mozzarella made from “Latte Fieno STG” (high mountain cow’s milk), perfect for eating ‘on the go’ was another of their launches.

In an interview with Fruit Today, Tom Fusato, the Sales Manager at Brio, ran through the main projects that the company is developing. The ones that stand out are: the international cooperation carried out with Agrintesa to market the ecological pineapple ‘Dolcetto’, from Togo (Africa). The fruit, of the Pan di Zucchero variety, was presented using the brand Alce Nero and is characterised by its small size and intense flavour, as well as by the colour of its flesh and lack of central trunk. But the most important point lies in its solidarity background, since 1,300 young farmers (1/3 women) are involved in its production, contributing to the improvement of the economy of the population of Togo under the umbrella of the NGO Confcooperative Coopermondo and the group of Cooperative Credit Banks and Federcasse. After a testing phase, this is the first commercial year for ‘Dolcetto’, which will have 500 hectares of surface area, all of them using an ecological system.

Also in the fruit segment, last year a new reference was added: the bio pomegranate ‘Chiccosa’ Alce Nero, in its Top (gourmet) line. This fruit, of the Wonderful variety, is characterised by its deep ruby red colour and it is differentiated from other varieties by its bittersweet seeds, easy to remove, with a pleasant texture, which are perfect for eating fresh or in juices and other preparations. Its dense, firm skin allows better conservation and optimises storage and transport, increasing its shelf life. All these advantages are added to an innovative, highly attractive packaging, with useful information for consumers and a QR code that refers back to a recipe book. The preparation, containing two pieces that weigh 750 grams, is presented on a recycled paper tray with handles to make carrying easier by consumers.

For Fusato, one of the keys to the ecological sector lies in “educating consumers” so that they appreciate the advantages of ecological produce and are ready to pay for this added value. “The bio element cannot be given away; we are opting for raising the quality level of the offer and not moving to the discount produce standards,” which is shown by its Alce Nero produce.

A boost for export

Looking towards the next three years, Brio intends to continue increasing its bio production and its export share (currently with a figure of 37%). To do this, it will carry out different promotion projects, such as the ‘Made in Nature’ by CSO Italia, in which it is taking part, alongside other benchmark companies from Italy. Funded by the European Union, it is aimed at promoting the values and culture of organic fruit and vegetables in Italy, France and Germany. At present it is in its initial phase and it will be developed until January 2022.