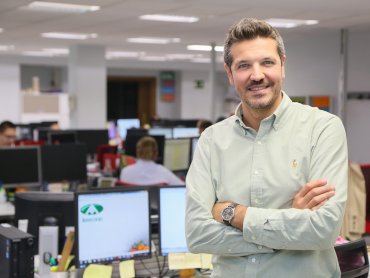 In a campaign marked by the incidence of mealy bugs and a production that has fallen by 2 digits, Anecoop will maintain its commitments outside European borders

What are the campaign’s first symptoms for Anecoop?

The campaign is late and at Anecoop we have been starting the first harvests in week 38 with fruit that already had suitable calibres.

At present, we are experiencing some uncertainty regarding the spreading of mealy bugs, but we won’t see the real incidence of the pests until the 15th of November onwards and this will mark out the real usability of the production.

Obviously, the persimmon producers are paying dearly for the ban on methyl chlorpyrifos.

Yes, they are paying for it because there are no alternatives that give effective results. They are more expensive and they must be carried out more frequently. The result is a lower yield per square metre and a production that is more expensive.

With these production costs both in the fields and in the warehouses, do you think that the distribution sector is going to respond to this situation?

The first point we must indicate is that we will see a very significant drop in the offer. When we talk about a reduction of 2 digits, it means to say that this is going to be noticeable in the volume. Spanish persimmon production is very concentrated over a few months and when there is a drop in the offer, it is noticeable. The distribution must respond not only to the increases in costs, but also to the smaller production.

If the offer is reduced, are we ready to serve distant countries?

Anecoop will continue with its long distance exports because we must not, and cannot fail our clients. The plant protection controls at the destinations force us to deliver pest-free products. In any case, there is enough fruit as there are already plots of land where there is no mealy bug incidence. At Anecoop we always think in the long term and the more markets we open up, the better placed we will be for the future. There is no way that we can only sell on the Spanish or European markets. We will continue working in the Near East, the Far East, the USA, and Brazil, and, to a smaller extent, on other markets.

Has the enthusiasm regarding persimmons from a decade ago disappeared? (I am referring to the fact that the results of the last few campaigns, for one reason or another, have been mediocre…)

Obviously. I believe that it is complicated to keep this enthusiasm up. The key question for this crop is the variety. We only have one, the ‘Rojo Brillante’, with a natural harvest between the months of November and December, which all the companies in the sector are stretching to be used from September to February. This means that a single variety has to bear all the treatments, all the pests. If we had more varieties, this would help in situations like the present one.

Is the idea of lengthening the campaign still a dream or is progress really being made?

There are many varieties in the world, particularly from Asia, but the process of crossing them and obtaining a material that is the same as the Rojo Brillante in productivity and quality is very difficult and very slow. The research continues. Once seen that the post-harvest techniques that we know about for other products have a limited capacity to extend the campaign later, ideally we would like to find a variety that we could harvest in January or February, but always with good quality.

There are extra-early varieties that do not have the same quality as the Rojo Brillante and the idea of bringing the campaign forward with these is very risky.

Are we going to see a wave of mass grubbing out of trees?

Yes, it is very likely. This grubbing out of trees, however, started back in 2017. In fact, the sale of vegetable material for planting came to a complete standstill. Farmers need alternatives and we are seeing a general toing and froing: from citrus fruits to persimmons and from persimmons to citrus fruits.