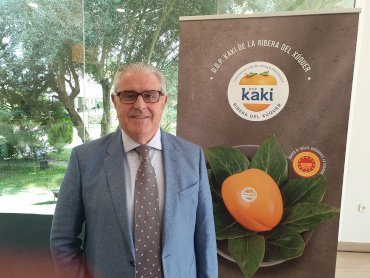 In 2007-09 the plantations were affected by a fungus, mycospharella navae, which undermined the entire productive sector. Today, a new pest, known as ‘cotonet’ or mealy bug is once again putting the sector in a critical situation

Cirilo Arnandis, chairman of the D.O. Kaki Ribera del Xúquer talked to Fruit Today euromagazine to explain the difficulties being faced by persimmon producers during this campaign. However, in spite of this seriously unfavourable situation, work is still being carried out on research and he trusts that in the very near future there will be earlier varieties on the market.

The situation is clearly very complicated, is it not?

Yes it is. It will be a difficult campaign for the farmers. We are facing two problems: the weather conditions due to the hail storm at the end of September, which will be sorted out by insurance companies, and plant protection, which we must face up to, as we have done at other times. It is not the first time we have been challenged by a pest; we did it with the mycospharella, which we managed to beat. I am sure that we will also find a solution this time.

We are at a critical moment, but persimmons have a great future and this situation could possibly be used to regulate the production all over Spain. There have already been areas grubbed out and it is likely there will be more, but the persimmons from the Ribera region have a higher quality and productivity than in other geographical regions.

In view of the circumstances, it seems that both in the fields and in the warehouses additional costs could be high. Do you think the large retail sector will understand the problem?

Indeed, we are being faced by several problems at the same time. Not only have we had to use many treatments in the fields and therefore it is more expensive, but the increase in the cost of electricity, along with the rise in price of cardboard and plastic mean that we will have to pass them on in the final price of the produce.

The preparation expenses in the warehouse are also higher and more fruit will be discarded, meaning that producers won’t be paid for it. Accordingly, the large retail sector must be aware of the reality being experienced by the producers and pay fairly so that they can produce again.

Do you think that the golden years of the persimmon have gone and citrus fruit will return? Where are the great expectations that this product represented a decade ago?

I have always said that the Valencian Community’s future did not lie in persimmons, but rather they are a complement to citrus fruit. And this has been clearly shown if we compare the volume of both productions (around 500 million kilos of persimmons – the maximum forecast -, compared to 7 million tonnes of citrus fruit.)

In the Ribera region, persimmons have been a project with which we have obtained an exceptional product for 20 years that has given good profitability to its farmers.

In a situation like the current one, is preference being given to the so-called ‘more loyal’ markets?

Obviously, in the first place we owe it to those who backed our product and have been buyers for many years. We cannot let them down. We will send produce to more distant markets, but less quantity.

Have we come to a standstill regarding a question that would wake the sector up; I am referring to lengthening the campaign for a few more months?

No, not at all. At CANSO, since 2006, they have had the only agreement for variety improvement that exists in the northern hemisphere. We are working with researchers from our own cooperative and with those from the IVIA (The Valencian Institute for Agricultural Research) and in the near future we will see plantations of a new persimmon for harvesting in September. It will be called Septiembre Brillante.

What promotions will you carry out this year on the different markets?

We have the two previously obtained European promotions, a Spanish one and another for Europe. France and Germany are the countries that will receive the most important communication roll out.

We will not carry out campaigns in third countries because this year the European markets will have priority, but we will start them up again when the situation gets back to normal.