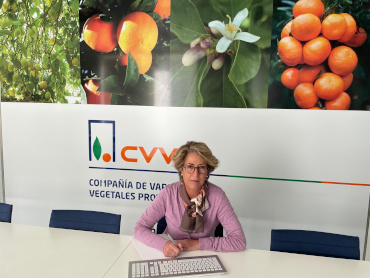 The Manager of the Compañía de Variedades Vegetales Protegidas AIE (CVVP), Reyes Moratal, affirms that defending the Nadorcott variety is guaranteed up to the last day on which its protection expires, the 31st of December, 2029.

The executive assured Fruit Today that “our efforts will be doubled to prevent offences being committed during the last years of the protection.”

The Nadorcott variety still has a third of its life under licence to go, but there are some who don’t understand these dates very well…

Yes, indeed. It is an important point that we want to emphasise and to provide the security that are licensees deserve. The licence was given for 25 years and it runs out on the 31st of December, 2029; therefore, it still has a third of its life to go under protection and there is still a great deal of work to do.

Only from the 1st of January, 2030, will a licence no longer be needed to plant these trees. But until the 31st of December, 2029, the rights are exclusively held by the plant breeder and nobody can graft or plant Nadorcott trees without a licence.

Some people think that in 2027 or 2028 they will be able to start grafting and in 2030 they will have their first harvest. This is a mistake; we are not letting our guard down. If, in February 2030, we detect that there are plantations that were grafted or planted without a licence before the protection came to an end, we will be able to undertake legal actions. We have to look after those who have paid royalties.

So, what steps will be taken against the offenders?

There is a belief that the Club is not going to pursue the illegal growers or monitor the fields. But our mission is to defend those who have the licence and there will be no slacking. We are going to double our efforts to prevent offences from being committed during the last years of the protection. It is one of the main purposes of our association: to fight against fraud. We already have agreements to provide all the resources required; financial, human, whatever might be needed.

Are there many illegal plantations?

Incredibly, there are still illegal plantations. There were many at the start of the protection due to ignorance and incredulity that an exhaustive control was going to be carried out. We have several lawsuits still in progress, because many years go by before there is a sentence. We always try to reach an agreement with the offenders. We have signed over 200 agreements to date since 2010. But if no agreement is reached, we take it to court.

What is the volume on the Iberian Mainland?

In marketed and labelled fruit, during the last campaign, we would be talking about around 173,000 tonnes. The global volume is around 200,000 tonnes. It has remained reasonably stable in recent years, because there are plantation renewals and the ages must be taken into account.

Demonstrations by citrus fruit growers and farmers in general have become common occurrences. How does this affect the Nadorcott?

There is a significant difference between Nadorcott and other varieties, because, although things might go badly for everyone, they always go better for those who have Nadorcott, as this variety is more profitable than the others. All the external factors, such as the costs of inputs or transport affect the campaign, but if you are in a good position with Nadorcott, the impact is not the same.

Prev“We are evolving towards a top-quality strawberry”
Orri Mandarins: once again, unbeatableNext
YOU COULD ALSO BE INTERESTED IN