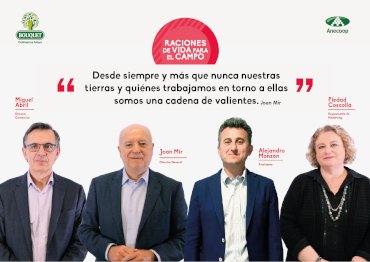 Anecoop’s initial programme for the watermelon campaign is about to reach 160 million kilos. Of these, the sales volume is estimated at around 150.

Over 80% of the production corresponds to the seedless watermelon group and the remainder refers to the so-called ‘pollinator’ group. In the latter, black watermelons with seeds have almost disappeared and there are only around one million kilos left, planted in monoculture to meet a part of the home market sales programme in this segment.

Although the collaboration with Santiago Apóstol de Tomelloso is now in its fourth season, its final incorporation to the Anecoop group will allow greater competition at the end of the campaign. This will entail the addition of around 6 million kilos of watermelons, along with the launching of the Bouquet Premium watermelon. Another of the points in its favour will be an improved position on the melon market, with a Piel de Sapo line “Bouquet”, aimed at the Spanish market.

The marketing manager at Anecoop, Piedad Coscollá, explains the uniqueness of this year’s Bouquet campaign ‘Portions of Life for the Countryside’, which was created at the end of 2019, when news of an empty Spain filled the media with reports of the difficulty of living in these regions. Subsequently, when farmers demonstrated in the cities with their tractors, “we got down to work and, without expecting it, the Covid-19 pandemic has shown the importance of a strong, independent, national agricultural sector. What would have happened if our country’s food had been in the hands of third countries, as occurred with healthcare material?”

“We have experienced a chain of opportunities to showcase our primary sector,” the expert explains.