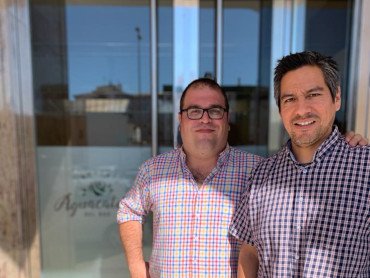 Aguacatera del Sur expects to close the year with an important increase in volume in spite of challenges such as Peru’s overproduction and Covid-19.

The avocado counterseason marketing campaign was envisaged as being complicated due to Peru’s overproduction, which made prices drop between 3 and 4 times compared to the same period in the previous year. Then, the problem of the pandemic occurred. “We can say that the combined effect of these factors, talking specifically about avocados as a product, has marked this campaign. In fact, consumption increased, but the oversupply ended up prevailing and we had a few weeks in the summer with quite low prices,” according to Miguel Loayza, head of purchases/imports at Aguacatera del Sur.

The company expects to close the year with an important increase in volume of marketed kilos, reaching 10 million kg, although it expects to maintain its invoicing levels, advances Óscar Martínez, the sales manager.

Its strategy, based on “working with the best from each country”, has helped them to rely on very high quality produce in 2020, “one of the most daunting years for the avocado industry, not only in Europe, but worldwide.”

Compañía Aguacatera was established in October 2018, and it has quickly found its niche as a benchmark company in the marketing of avocados on the European market, managing a top-class portfolio of suppliers and obtaining non-stop supply 12 months of the year. Last year they closed the first campaign with a very positive account, reaching 20 million euros in invoicing.

Aguacatera del Sur works with imported produce from Peru, Mexico, Colombia, South Africa, Israel, Brazil and Chile. “This year we have improved our client portfolio and increased exports. Last year our sales were 70% national and 30% exports, and this year they have levelled out at 50%, Óscar Martínez explains.

As has occurred with other fresh produce, avocado consumption was boosted during the pandemic. “It remains to be seen what the market reaction will be during this last quarter of the year, as well as the possible determining factors, such as new lockdowns or restrictions for the hotel and catering trade.”

In spite of everything, avocados still have a lot of room for improvement and the forecasts show sustained growth for the next 10-15 years.

Currently, the avocado market is dominated by the Hass variety and, although there are some genetic developments of varieties derived from Hass, they are not being used at any time as a trend to compete regarding lower prices, rather the contrary; they are being used to target specific sales windows that can make these developments and investments profitable.