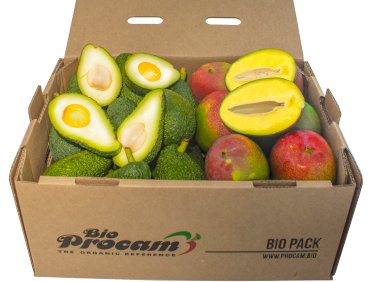 E-commerce has been multiplied by six at Procam since the pandemic started and the company is beginning to enjoy customer loyalty.

A year ago, BioProcam launched its virtual store, a direct route to consumers which has seen an incredible evolution since the start of the Covid-19 pandemic. The manager, Fernando Martín, confirms to Fruit Today that orders have multiplied by six compared to last year and customers that try the online service, repeat and make regular orders. The case of subtropical fruit is highly relevant, with sales that are above the average of other references in the mono-product and mix version (avocado and mango). But not only this: “we have noticed that as soon as the season starts and we include avocados and mangos in the BioPacks (boxes with an assortment of several products that change according to the season), sales immediately rise.”

The boom in subtropical fruit consumption, particularly avocadoes, along with their longer shelf life are some of the keys that explain the good evolution of the e-commerce. Likewise, “the selling prices are similar to the average ones that can be seen in the supermarkets, with the advantage that we deliver to the door, directly from the fields.”

During this campaign, BioProcam has added 10 hectares of mango crops, which have now come into production. With regard to avocados, although in general a smaller volume is expected compared to last year, the 2019/20 figures are expected to be sustained due to between 30 and 40 hectares of new plantations coming into production, meaning that the sales figures should be maintained. In total, they expect to market around 3 million kg of mangos and avocadoes, through traditional sales channels and the online store.

25% transfer from tomatoes to cucumbers

BioProcam’s volume of vegetables will continue with figures that are similar to last year’s, 7 million kilos on 100 hectares.

Cucumbers are their star produce and this year they will add an extra 25% of surface area, at the expense of their tomatoes. The importance of tomatoes is seeing a noticeable drop, as a result of the low prices being reached in recent years. “In the end, the descending trend in prices for conventional crops is dragging ecological crops along with it, and this affects us.”

This year they have started to implement techniques to improve the flavour of tomatoes in all their crops thanks to a project carried out with Tecnova over the past two years. After a first year of commercial trials, the results have been highly satisfactory. “Customers have shown high appreciation for the improvement in flavour and the greater uniformity of the fruit,” the manager from BioProcam concludes.