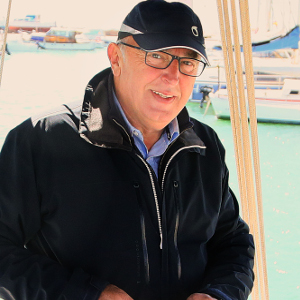 We chose a bad day, a day with strong gusts of a westerly wind that later veered round to the east. However, the experience, although short, was worth it. We sailed out a few miles from Puerto Siles while our interview took place.

In 1956, Vicente Bayona Pérez was born into the heart of a family that had been devoted to the citrus fruit growing business for almost a century, in Quart de Les Valls (Valencia).

Before boarding the Star Mizy, a Bavaria 39 cruiser, we decided to eat something on the pier. Vicente’s friendly nature becomes more obvious as everyone greets him; he is a well-loved local.

He is the first person I have interviewed who does not shy away from publishing his political colours; with good reason: he is a councillor for Ciudadanos in the town of Canet de Berenguer (Valencia).

He considers himself to be a lucky man, possibly because his amulet is the famously lucky rabbit, Bugs Bunny, which once he lost and almost miraculously, managed to get back. The rabbit that used to say: What’s up, Doc? always accompanies him on his business trips.

What does this boat mean to you?

It is our peaceful refuge for many weekends. Sailing is like “eating a dose of relaxation” if the day is right. It can be the most sublime silence, where you hear the splashing of a dolphin swimming alongside. It is a therapeutic necessity.

Where do you usually go?

Sailing in the dark?

Of course. It isn’t a problem. The navigation lights, torches, lifejackets, flares, equipment for abandoning ship and night viewing glasses are all prepared and we dress up warm, even in summer. And we’re ready to go. 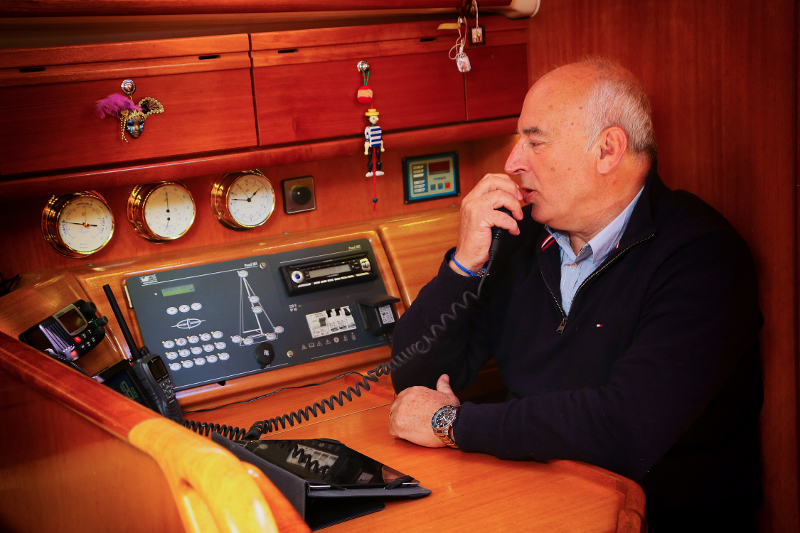 It is a question of keeping watch on the radar screen and the AIS. My wife enjoys it more than I do because she stands on the deck and uses binoculars to look at all the stars that you can’t see on land. At dawn, you start to greet others who have done the same as you.

Nothing could be further from a Ciudadanos militant, married to a beautiful Cuban with a Russian name.

Well, not all Cubans are communists and there have been many dissidents. And on the other hand, I met my wife before visiting the island. As I am a lucky man, the first time I bought a ticket to Cuba (at that time, you had to use travel agencies), when I came out, I bumped into her. We said hello because everyone in the village knew each other and she asked me to take an envelope for her. I said yes, but that she had to close it in front of me. The rest is history. We have been married fifteen years now.

Your wife became trending topic in the Sagunto floods in 2016.

Yes, it’s true. I was in a plenary council meeting when I was told that my wife’s car was underwater in a floodable run-off channel and she was standing on the roof of the car.

I ask myself: who would go into that mousetrap under those circumstances?

It was a mixture of absentmindedness, because she was thinking about her studies and on the other hand, audacity. She has a very strong character.

Does the fact of being born in a village of 1,000 inhabitants and being a son and grandson of farmers permeate your nature?

Yes, of course it does. I have the citrus fruit growing DNA in my genes. My grandfather was one of the first exporters in this region; my father also worked the land, as well as the business side and my uncles rounded off the business with international fruit transporting. I think that my path was laid down because I was never a good student, but I was incredibly happy. As a child, I was fascinated by the lorries that came to our house to load up: Pegasus, Leyland Comet, the vehicles of the time… At the age of 14, I went to London in the lorry with my uncle, passing through Paris. That journey marked me because I was un xiquet de poble’ (a country lad); I saw the vastness of those large cities and I discovered that the world is a large place that has to be experienced and travelled.

And your love of the sea? How long have you been sailing?

My childhood was closely linked to the sea. When school finished for the summer, my entire family squeezed into the lorry, loaded up with everything we needed for the summer: the fridge, the beds, etc. We used to spend three months at L’Almardà beach. We were like little savages, outside all day, wearing bathing trunks and flip-flops and with a lorry inner tube as a rubber ring. That is where my passion for the sea was born. I have had a vessel for over two decades now and I have my leisure vessel captain’s ticket.

Have you experienced any danger?

No, categorically not, because I am very careful with the weather forecasts; I study them carefully. I am of those who say that when the sea is not calm, the best place to be is in port or in the bar in port. The worst difficulties have been coming back to port when the times were very tight regarding the forecast. I always see the future forecasts. This year in Ibiza, there was a very severe storm that destroyed entire yachts moored in the coves, but I left the day before because it was announced on the weather forecast.

Would your obsession with the weather forecasts be due to your professional training, always looking at the sky?

It’s not the same on land and at sea, but I control the avocado productions at the same time.

Is it your fault that the family-run citrus fruit growing business has been overshadowed by avocados?

Not completely; we continue maintaining our productions, but new alternatives had to be found and this is what we did. My concerns were channelled into looking for new markets for citrus fruits and I am lucky because I enjoy my work.

Do you take part in any regattas?

Yes, this time last year I was doing the ‘Salt Route’: Denia, Formentera, sailing round Ibiza and on to San Antonio.

Do you do any sport?

Not assiduously. I am often not at home, but in the winter I like to ski in Andorra. Do you think by any chance that manoeuvring this boat is a piece of cake? It weighs 9,000 kilos. If the wind is behind you, we raise the mainsail and the genoa, but if not, it has to be controlled using the engine.

After more than three hours on board, we return to port.

I need to moor in the port.

Okay, we will be waiting on the mooring.