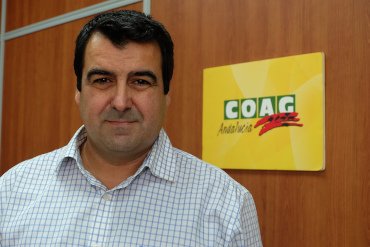 “Morocco is far from being a loyal partner”

Over the past 20 years, Morocco has put the spotlight on the Western Sahara (WS) and currently it is developing a mega agricultural project in Dakhla with which it “seeks to strengthen its illegal occupation of the territory because by international law it belongs to the Saharan people,” according to the study by the NGO Mundubat and COAG. We talked to COAG about the effects of this on the agricultural sector.

Is there any record that the Spanish or European administrations have done anything to stop the ‘occupation’ in Dakhla?

Up to now no, rather the complete opposite. In the last agreement, COAG brought a lawsuit to ensure produce coming from the Sahara was not covered by the agreement held between the EU and Morocco for agricultural trade. In the end, the EU High Court of Justice upheld our case, stating that the agreement did not contemplate productions from WS. The EC, at that time, carried out a modification process of the agreement to cover these productions without entering into any debate as to who should be administrating this territory. And additionally, the consumer’s right to know the source of the products continues to be violated. Morocco continues labelling produce as Moroccan when it does not really come from Morocco.

How is what you call the “Moroccanisation” of produce carried out?

In Mundubat’s study, we have been able to detect how the agricultural trade works, basically for tomatoes, between Morocco and the productions that they have in the WS. It has been shown that 11 companies funded by both European and Moroccan capital are located there. We are not talking about Saharan companies, or companies that are in the hands of the native population, but rather they are part of a colonisation process and they cover almost 900 has. This produce leaves Dakhla (formerly Villacisneros), mainly being transported to Agadir, where these 11 companies, in many cases, have another subsidiary and this is where the produce is packaged. It is mixed with Moroccan produce and it leaves for destinations within the EU. What they are doing is concealing the real source and the produce arrives under the agreement of association, free from customs duties and without fulfilling the European regulations. This colonisation strategy favours the companies that are established there and that have moved 14,000 Moroccan workers there to work.

In the study, it states that within this conglomerate King Mohammed VI and the Minister of Agriculture take part. Are there any Spanish companies involved?

Mundubat is not an agricultural NGO, but rather a humanitarian-orientated one, but it has been able to thresh out part of the business plot, although it has been very difficult because Morocco is a country ruled by a dictatorship. These companies have participation by the King of Morocco and senior officials in the Moroccan Ministry of Agriculture. The Minister is deeply involved and many direct links to French companies, with head offices in Perpignan have been detected. Are there links with Spanish companies? We understand that there are, but we have not been able to discover any names. The study will continue to investigate, although they are not making it easy for us.

In Dakhla, the intention is to reach 5,000 has in 2030. How could this tomato megacity affect Spanish production?

Morocco has been planning this growth for years. They started with citrus fruit further north, near the border between Morocco and the WS. At present, it is very attractive to produce there because of tax exemptions and the lack of regulations regarding the production, the environment or the labour areas. They have seen a bonanza in agriculture and they are supplying all the resources needed in a region with difficulties affecting water and energy supplies. In fact, they are talking about building a desalination plant. Over the past 5 years, Almeria has lost around 3,000 has of tomatoes and their green beans have become anecdotal. The Moroccan project is highly concentrated on tomatoes because there are varieties that stand up well to transport and labour is cheap. They are certain that they are going to extend their range, particularly in melons and watermelons. This can already be seen in melons, where the French companies are concentrating on Galia and Cantaloupe and for other products such as courgettes and peppers, Morocco is growing at top speed. Will they also install their farms in the Sahara? It still remains to be seen, but the truth is that Morocco is a danger for European production. With this study, we are trying to show public opinion that national produce should be eaten, whether it is Spanish or European. Our politicians are already showing that they have no intention of stopping it and they continue to give in to the blackmail that Morocco is setting out for the EU and Spain.

The EU refused to review the agreement with Morocco after Brexit. Are you planning to carry out actions to achieve this?

Of course, public opinion is starting to see that for a long time we, in the sector have been reporting that Morocco is far from being a loyal partner. Morocco has been capable of using a humanitarian crisis, including children, to obtain both its political and trade ends. The latest case is the commitment that it had acquired with the EC when the debate about Brexit started: this was that the trade agreements were going to be reduced in a similar percentage to the drop in population due to the exit of the United Kingdom. We demand that these should be materialised and now they say that they are not going to review them. Then Morocco has signed a bilateral trade agreement with the U.K. and they are talking about a quota of 47,000 t of tomatoes that are going to enter the U.K. directly and the liberalisation of melons, watermelons, courgettes, aubergines and cucumbers. In courgettes and peppers, they could cause us some headaches. This must lead to a reduction in their authorised quota and that they are not meeting; they also are not paying customs duties, etc. We are very surprised by the passive attitude of the Spanish government, which should be raising its voice in the European institutions, because Spain is the country that is going to be affected.

There have been more health alerts from Moroccan-sourced produce in avocados and peppers. Additionally, Coexphal has launched a campaign condemning this situation and Morocco has counterattacked calling a boycott on all Spanish produce. How do you see this movement by Morocco?

It is clear that they are using their weapons against the EC very cleverly. There is commercial pressure and we, as European producers, must convince public opinion about the social and economic benefit that the consumption of European produce means, therefore, we approve the approach made by Coexphal’s campaign. However, we do not approve of Spanish exporters bringing in produce from Morocco, and entering into conflict. At COAG, we defend Spanish farmers with Spanish production, and we reject any kind of imports from third countries, although they are supposedly arriving due to an agreement or however they want to dress it up legally. We reject offshoring. Morocco is somehow carrying out a campaign within its tantrum. But we have real arguments based on the quality, food safety, payment of taxes and generation of employment. We are asking Fepex for Morocco to not be present at the next edition of Fruit Attraction, because it is a trade fair for Spanish fruit and vegetables and it is not logical for it to take part in the current context that is being denounced by Coexphal. We ask for its veto and we sent them a letter on the 14th of June, for which we are awaiting a reply.

PrevOnion: The brakes are on for foreign markets
The Sahara, Crimea, Airbus-Boeing… The list goes on and onNext
YOU COULD ALSO BE INTERESTED IN