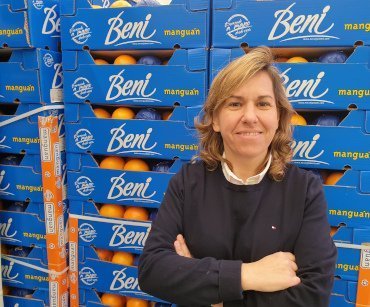 Open-minded and willing to accept any new developments that could affect the sales of a wholesaler, Manguán, S.L. does not fear the future because it believes that “the sector has always known how to reinvent itself”.

The customers, sales methods and even the products have all changed a great deal since the 1960s, when the Manguán family set itself up as a wholesaler at the Legazpi market. The second generation is now running the business and Eugenia Manguán, the company’s finance manager, explains to Fruit Today euromagazine that “at home we have always opted for integrating new developments as they appear. Otherwise, in a business like this one, we would have been left behind a long time ago.”

The company, which has always been closely linked to the world of citrus fruits (it still has its own productions in the La Safor region, Valencia) made its first changes towards diversification, using a global mixture at the beginning of the 1990s. Different national brands were added to this, as well as varieties of more current products, such as all the patented varieties.

“Current sales techniques mean not putting to one side products that a decade ago didn’t even exist, from bean sprouts or work lines such as food services for large administration centres or online sales companies and even telephone sales. The wholesaler’s quality of service and food safety come first for customers today,” Eugenia Manguán comments.

At its six stands in the wholesale market in Madrid, in addition to citrus fruits, it has a wide variety of seasonal fruit and vegetables. The company only imports off season citrus fruit from South Africa to continue its offer when the national produce has ended because “we support national produce all the way,” the businesswoman defends.

The company has a very broad range of customers, with priority being given to wholesalers from the provinces around the capital city or even in Galicia and Portugal. In second place, it serves large supermarkets and retailers and thirdly, it exports to the rest of Europe.