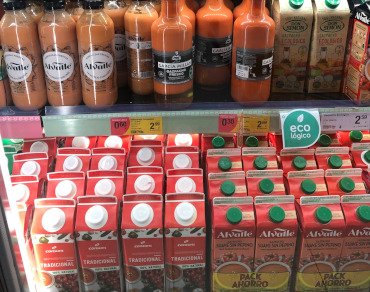 Gazpacho is the new commodity in supermarkets and the appearance of more agents is unleashing a tough competition. Who will make the grade?

Gazpacho, and more specifically, fresh gazpacho, which is beginning to gain ground over the pasteurised versions, is experiencing a boom and is emerging as the new commodity in the large supermarkets. They all work with at least one white brand and one reference brand, in the middle of a continuously growing context. And the fact is that some new brands have recently burst onto the market, associated with celebrities, such as ‘the Spanish people’s queen’, Belen Esteban, who has become a businesswoman with ‘Los Sabores de la Esteban’ and a Limited Liability company of the same name, allied with Cool-Vega from Murcia to launch, in addition to gazpacho, salmorejo and other new developments that are on the way, such as vegetable creams. Another of the most resounding cases is that of the dietician-nutritionist/influencer Carlos Ríos, who, after the success of his hummus, has launched gazpacho, salmorejo and mutabbel, all under the brand name ‘Artesur Realfooding’ prepared by the Andalusian company Novavegetal (a subsidiary of the Migasa Group) and Comerandalus. But they are not the only ones: the chef Pepa Muñoz, from the restaurant ‘El Qüenco de Pepa’, has joined up with Lidl to launch her version with pink tomatoes under the new brand, ‘Origen y Tradición’, and Cooperativa La Palma has opted for ready-cooked produce with a cherry tomato gazpacho that comes in its new line, Cherrymole®.

When you add up all the operators, there are around thirty on the market at present. A considerable leap if we take into account that Alvalle developed its first bottled gazpacho in 1991. It was so successful that Pepsico became interested in the company and acquired it in 2000 through its subsidiary, Tropicana. For many years it has led the segment, on a podium on which the García Carrión Group also had a place, which, with its Don Simon brand and as the supplier for Mercadona, it took over the leadership, and AMC (with MDD and ViaNature itself). However, according to Consumidor Global, the invasion of celebrities and the incipient price war in the sector has mean Alvalle’s sales have dropped considerably (they quote a plunge of up to 50%).

The company, with an annual production of over 30 million litres of gazpacho, is not going to give in, as can be seen by the announcement of a new investment of 6 million euros in ‘La Cocina de Alvalle’ plant, opened a year ago in Alcantarilla.

This high offer is going to progressively lead to a war for “the best gazpacho with a good value for money”, Teresa Brotons, Sales Manager at Bonnysa, affirmed. A reality that is beginning to be noticed on the supermarket shelves. “Taking into account that not all the operators are producers, the buying pressure that they are going to put on the fields is also going to be greater. For those of us who are producers, and in our case 100% Spanish, it is a challenge to find the balance between an exceptional product and a competitive price.” The ‘tomato-growing’ company since 1956 prepares gazpacho using its own tomatoes, a differential value that could be fundamental in the not too distant future. It should not be forgotten that tomatoes are the main ingredient of gazpacho and every year Spain is losing surface area in favour of imports from countries such as Morocco, a situation which, according to organisations such as FEPEX, COAG and Coexphal, will be worsened with the country’s macro-project in the Western Sahara. Brotóns affirms that “Spanish tomatoes are in danger owing to unfair pressure by third countries. We cannot be complicit in this situation if most of us in the fresh market do not do this. This is something that we have always done at Bonnysa and all our farms and installations are in Spain, in the same way that we have never purchased from these countries.” In the rest of the EU, consumers give priority to local produce, but Spain still has a great deal to learn on this subject. “It is important that we pass on to consumers the idea that when they drink a gazpacho, they do so with the commitment to quality of the Spanish fields and all the know-how that we have. The temptation of profit margins will always be present, but for us it is an exercise in responsibility and a commitment to our society and economy.”

According to the Ministry of Agriculture, Fishing and Food, between April, 2020-March 2021 65.2 million litres of gazpacho were consumed, with a cost of 127.98 million euros. Regarding the previous year, a drop of 5.3% and 8.6% respectively, has been seen, but if we look a little further back, to the pre-pandemic times, the slowing down is obvious. In 2019/20 the category experienced a considerable growth of 13% in consumption and 16% in value. The changes in habits that Covid-19 has imposed and the economic crisis and consequent contracting of spending – according to the Bank of Spain, families saved 164.7% more in the first quarter of this year compared to the same quarter of 2020, are all factors that influence this evolution. However, the self-care trend and the long-awaited ‘new normality’ without any doubt will play role in favour of the produce. To move forward, the there are several pending challenges: de-seasonalising consumption; opting for internationalisation and promoting the source of the raw materials.

Supplement information with the article: Gazpacho, fresh or pasteurised?

PrevGazpacho, fresh or pasteurised?
Karamel, from strength to strengthNext
YOU COULD ALSO BE INTERESTED IN