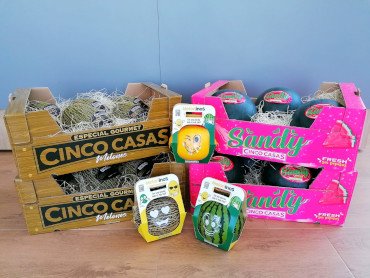 The new brand image offers a more modern, fresh look, without losing the essence of the company’s origin and tradition.

Cinco Casas, the main brand from the Cincofresh Group, is starting the 2021 melon and watermelon season. In May, it started the summer campaign for both fruit, sourced from Almeria and Murcia, which will continue until approximately mid-July. Then, the watermelon and melon harvests will begin in La Mancha, where they have their own crop fields. They will conclude the campaign, approximately, between the end of September and the beginning of October, although they maintain melon production all year long. The prepared produce is used for national marketing and for export, mainly to Portugal, France and Germany.

Taking advantage of the start of the season, Cinco Casas is presenting its new brand image, on which they have been working for months to “offer a more modern, fresh look, without losing the essence of our origin and tradition, which is our driving force,” states Tomás García-Escribano, CEO of Cincofresh. Under the umbrella of the brand are their Natural Gourmet melons, their Sandy Fresh watermelons and their fun Meloninos, pieces of mini fruit.

According to García-Escribano, “we expect this new campaign will reach a production of over 14 million kilos between melons and watermelons.” And he ends by concluding that “our most important goal is for our clients and end consumers to be satisfied with our product, both due to its appearance and to its great flavour.”

Cincofresh is a young, innovative fruit and vegetable growing company, located in the middle of La Mancha, precisely in Cinco Casas (Ciudad Real), the village from which its main brand takes its name. It has its own crop fields of different varieties of watermelon and melon, its main products, as well as pumpkins and asparagus. In addition to its conventional crops, it also has ecological production. The company’s significant growth on a national scale is mainly due to the great fertility of its land and its good weather conditions, as well as the important work of its farmers and warehouse employees. Each campaign reflects the excellent work carried out by their people.