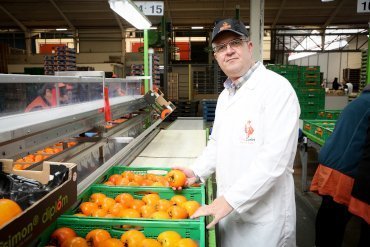 The cooperative has reached 40,000 tm of produce during the recently ended campaign, compared to the previous season’s 28,000 tm

January has marked the end of a plentiful persimmon harvest. This amount has allowed the operators to have stocks up to the end of the month. “We have stored more produce than ever before to distribute proportionally and we have over 6,000 tonnes in cold storage,” explains José Climent, manager of the cooperative from Carlet (Valencia).

Exactly at the moment when most of the operators started to store fruit, the persistent rainfall at the beginning of December damaged the quality of the produce, affecting both its ripeness and firmness. “We could have stored more, but the weather conditions prevented us from having the required quality to do this.”

The cooperative is one of the leaders in this produce, with a daily production capacity of 600,000 kilos. Its commitment to persimmons is longstanding, and six years ago it remodelled its entire infrastructure to give priority to this produce. The preparation volume during this campaign has been so high that once again it has had to restructure Warehouse No. 1, where 7,000 tm were prepared and new cold storage rooms have been readied.

In general, the season has been marked by an important offer that initially was thought it could double last year’s volumes. Finally, the harvest was not as high as expected, but it was more abundant than previous ones.

These figures have made it obvious that the produce offer has grown faster than its demand, since only 20% of Europeans are familiar with this fruit, according to different market research studies. “It is obvious that the persimmon has a long way to go and its consumption must grow to match a production as plentiful as this year’s.”

The intense marketing and advertising campaign carried out by the Grupo Persimon both in Europe and in Spain is in line with this idea. “We are highly aware that the protection of the produce under a D.O. and the Persimon brand name give us a prestigious image, which could not have been achieved for a new product such as the persimmon on its own,” Climent points out.

The campaign has gone through some harsh times, particularly from mid-October until the end of November. From this point onwards, prices started to rise, but it is evident that the payments to farmers will be much lower than those from 2019.

Although the Valencian persimmon’s main market is Europe, the cooperative from La Ribera has grown substantially in Canada, the USA and in the Persian Gulf countries. “Our growth in Arab countries is particularly appreciable, and we will close the campaign having dispatched around 1,000 tonnes of produce. These are highly demanding destinations for both size and quality and there is no flexibility regarding the attributes the fruit should have,” the executive explains.

Southeast Asia is also a market that is starting to take off. “The best option would be for us to have a protocol with China, because it is a country that is familiar with the produce, but it seems that we will have to wait.”