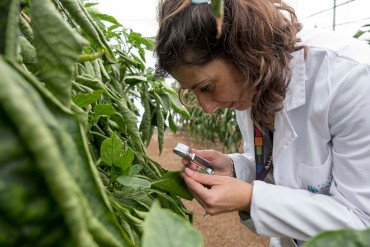 The EU’s green policy and Covid-19 are boosting consumption of ecological produce, positioning Spain as a strategic country.

We have reached an important point for ecological farming due to topics as relevant as the ‘From Farm to Fork’ Strategy. The Minister of Agriculture recently affirmed that 25% of Spain’s agricultural and livestock production could be ecological by 2030, as established by the EC. A plausible horizon, because at present 10.24% of the usable agricultural surface area already has ecological crops, according to Ecovalia. Extending this spotlight to a global scale, as shown by the latest statistical data from IFOAM and FIBL regarding the world’s ecological production sector corresponding to 2019, Spain is the third country in the world with the largest surface area of ecological crops, with around 2.4 million hectares, only surpassed by Australia (35.7) and Argentina (3.6), and it holds the ‘gold’ on the European podium of eco surface area, followed by France (2.2) and Italy (2).

Over the last five years alone, the ecological surface area in Spain has increased by 37.7% and during this same period the number of ecological operators has grown by 40.5%.

What are the prospects for the sector, and which are the key aspects for the strategy laid out by the EU? Álvaro Barrera, chairman of Ecovalia, is clear: “favourable winds are blowing for the sector.” At Ecovalia, the Spanish professional association of ecological production, they have been working on this for 30 years and they have a clear target for 2030: to reach 20% of ecological consumption and that 30% of the usable agricultural surface area becomes eco. Their opinions differ from organisations such as Freshfel and ALAS, which are showing reservations regarding the feasibility of Farm to Fork. “We are in 2021, where ecological production is agronomically productive, economically profitable, environmentally necessary and is a response to health. The resources at present have nothing to do with those we had 5 years ago, both in terms of knowledge, university schools, trained professionals and plant protection products. Both ‘From Farm to Fork’ and the Biodiversity Strategy set out reachable goals,” Barrera affirms. And he qualifies: “We must be clear: the impact of the Strategy will not be the same in all the countries of the EU. In Spain, producers have been working on this line for the past 20 years, which means that in our country, for example, fertilisers won’t have to be reduced by 50%; we don’t think it is necessary because they are already virtually not used; they don’t even reach 15%.” 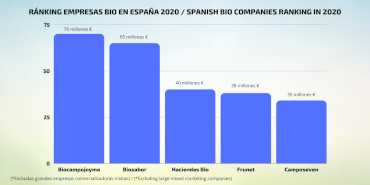 With respect to consumption, the United States is the world leader (44.700 million euros), followed by Germany (12,000 million euros) and France (11,300 million euros). According to the FiBL report, in 2019 significant markets such as France continued experiencing important growth rates of over 13.4%, and Denmark took over the first place in bio market share, with 12.1% of the total food market and 344€/per capita.

Spain is a long way behind the leading countries (7th position in the EU and amongst the top ten in the world with 2,133 million euros), but Covid-19 has been a spur. Bio production, which annually rises by over two digits and which always experiences its greatest growths in years of economic crisis (from 2011 to 2014 the consumption figures doubled), has also maintained the rising rate during this healthcare crisis. During the pandemic, society has taken refuge in organic production, with an extra 25% consumption in 2020. In March and April alone, it rose by around 12% compared to the same months in 2019. “Four years ago, we were below 20€/person per year and now we are above 46.5€, therefore although we are still a long way behind Denmark and Switzerland, we are getting closer to the figures for countries such as Sweden.”

This year Ecovalia is celebrating its anniversary. The professional association for ecological production has a social mass of over 15,000 producers, farmers, livestock owners, industries, transformers and preparers, bringing together 62% of Spain’s ecological surface area. Ahead of them they have challenges such as meeting the Sustainable Development Goals (SDGs) and the European Green Deal, which society will have to face up to over the next few years with a contribution by everyone: public administrations, private companies, associations, groups and citizens.

PrevFuture: demand and varieties
“The demand for eco seeds is rising by 5%”Next
YOU COULD ALSO BE INTERESTED IN