Flavour and resistances at the Melon & Watermelon Week 2021 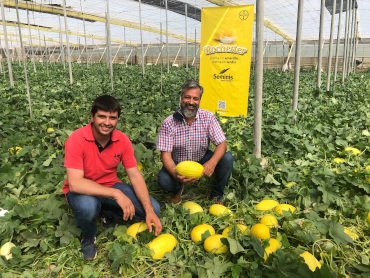 Bayer is presenting two varieties for Murcia and another two for Almeria at an event where there will be many innovations in colour and shape.

Murcia is hosting Seminis’ traditional Melon Week from the 30th of June to the 9th of July with both on site and digital presence, established due to the pandemic and parallel activities such as the holding of two talks with producers and supermarkets, and another more technical one that will tackle the competitive advantages of their melon varieties, agronomically speaking.

There will be no lack of innovations, and these will have a prominent space as Miguel Sánchez, head of relations with the Bayer Chain, explains to Fruit Today. The development of different coloured and shaped melons are some of the lines being followed by the company’s R&D.

Commercially, the company continues with the promotion of the two new developments for Murcia that it announced last year: the cantaloupe Sugar Moon and a new Orange Candy. The orange-fleshed Sugar Moon is recommended for late cycle in Murcia and La Mancha. It is the company’s first variety with resistance to the 3.5 strain of powdery mildew, aphids and IR to CYSDV, a complete package that makes it perfect for ecological crops. The new Orange Candy completes the line, bringing resistances to 3.5 powdery mildew and aphids. A very versatile material, it can be planted in the open-air segment in Murcia and La Mancha and under plastic in Almeria.

In the province of Almeria, Seminis also is carrying out an interesting launch this year: Rochester (yellow), and it is strengthening the promotion of Sugar Kech (cantaloupe) in its second year. Both of them have a sturdy plant but are easy to handle for farmers, and they incorporate resistances to fusarium and powdery mildew.

Rochester was created to complement Chester. For transplanting from the 15th of February to the 20th of March, it sets very easily and has significant homogeneity in size (1.4-1.8 kg). Internally it stands out due to its flavour and slightly crunchy flesh and externally, its skin has a slightly rough appearance, appreciated amongst consumers from the United Kingdom and Germany.

With the orange-fleshed cantaloupe, Sugar Kech (transplanting from January to the 20th of February), farmers obtain a variety that concentrates its flowering, which results in a high homogeneity of its fruit (0.8-1.2 kg). And its ‘good eating’ stands out as an advantage for marketing and for end consumers, with a tasty flesh texture recalling traditional melons, but with an excellent post-harvest.

Bayer also continues to promote its latest incorporations to the ‘Cyro Line’ range, Albizu and Galvir, which are seeing “a very good evolution in sales. We hope to continue increasing the market share with them,” Miguel Sánchez advances. Their assets include a complete package of resistances that also increase productivity, with flavour and a long shelf life.

PrevReady to eat, also in Galia
Enza, going for 12 months a yearNext
YOU COULD ALSO BE INTERESTED IN