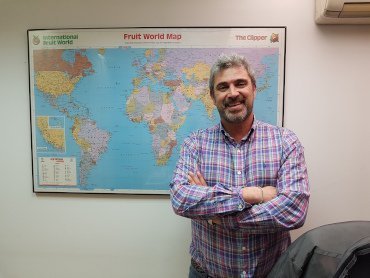 The alliances made by Kiwi World, a company from the Grupo E. Sánchez, allow the company to have a safe, reliable offer 12 months of the year.

What is Kiwi World’s turnover?

Around 14,000 tonnes of kiwis per year. Since the creation of Kiwi World in 2005, it is a figure that continues to grow.

What are the company’s main resources?

I believe that the role played by our suppliers is very important, as we are a country that has a deficit of kiwis. We have very close links with companies that have a long history in this product and are highly specialised in it, such as the Italians Spreafico, Rivoira and Jingold, or the French company Blue Whale. We also have Greek and Portuguese suppliers.

In Spain, we are developing the sale of Kiwi La Isla, a small production, but which has important recognition due to its very high quality.

Furthermore, belonging to a business group such as Frutas E. Sánchez, allows us to be in the front line of the battle regarding productions from the southern hemisphere, since in Chile we have our own product, around 150 hectares, and an export company belonging to the Sánchez family.

Do you think that Spain is going to continue being the leading kiwi consumer in the world?

Yes, I do. Each Spaniard eats around 3.5 kilos of kiwi, compared to Americans, who only eat 800 grams.

What I believe is that we will see a change in its varieties, and yellow-fleshed kiwis will be the ones behind the growth. This trend is prevailing all over the world now. The New Zealand kiwi giant is seeing this and this means that other yellow varieties will come into play with their different peculiarities: Sorelli, Dori, Jintao, etc.

Are Kiwis no longer seasonal?

Of course not; kiwis are not only eaten in the winter, they are available all year round thanks to productions from the southern hemisphere. Consumers assimilated this purchase a long time ago. The only handicap that we can see is that Mercamadrid buyers do not want ‘ready-to-eat’ produce to ensure that the fruit lasts longer on the supermarket shelves and, on this point, there is a great deal of work to be done to convince fruit sellers that product rotation would be greater if it were riper.