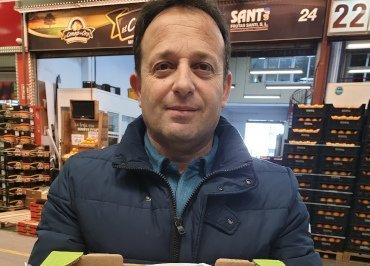 Plump, the Spanish subsidiary of the Portuguese Luis Vicente Group, is one of the top specialists in tropical fruit

Plump, with its own centre in Mercamadrid, supplies the stalls of this market with limes, pineapples, giant papayas and mangos by both air and sea.

The group is strategically located in different production areas all over the world. Its pineapples come from Costa Rica and its other tropical fruits come from Brazil.

On the other hand, Holland is the main hub for its distribution in Europe, and Madrid is another of its important subsidiaries for freighting. Luis Vicente is also present on the Lisbon wholesale market and has three work centres in Torres Vedras (Portugal).

In the Portuguese former colony of Angola, the company produces potatoes, onions and carrots for the home market. “Africa will remain a challenge for the next few decades, but at present there are still many internal supply problems, which make growth difficult,” comments Eduardo Chaves, head of the Spanish market.

Its own production in Portugal is another of its most important strengths, particularly in Rocha pears, to which are added Royal Gala apples, peaches, nectarines, persimmons, quinces and plums. Volumes of around 10,000 tonnes are reached in Rocha pears, of which 70% are devoted exclusively to export. Although the volumes are smaller, the stone fruit productions (plums, nectarines and peaches) in Alentejo make up around 200 hectares, with the production going to both to the home market and export.

The Luis Vicente Group is one of the Portuguese companies with greatest international projection, as can be witnessed by its attendance at the Berlin trade fair for over a decade. At this edition, the German capital city was used to present its new brand, María, for the entire national production, a definite step in the right direction to continue its role as a reference in the Portuguese fruit sector.

This country is, likewise, the main point of an intense export activity towards Brazil, Canada, Morocco, England and France.

A decade ago, the Group established itself in Mercamadrid through its subsidiary, Plump. Its activity is not linked to the traditional corridor sales, but rather to the distribution of volumes on pallets to the wholesalers.

“The speed of communication between Madrid and Lisbon and the large arteries that meet up in the Spanish capital city turn it into an important distribution centre by road to any destination,” Chaves explains.

Twelve months of the year the company maintains its import business in four categories: pineapples, limes, mango by both air and sea, and giant papaya. “This last fruit has turned us into a benchmark company in the sector and is one of most important specialities.”

Avocados, mainly imported from Peru or through some Spanish companies, are sent almost entirely to the Portuguese home market. “Spain has its own very strong productions and brands in this reference, therefore we only serve the Portuguese market,” the executive comments.