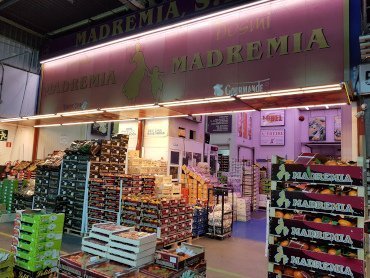 In 2017, the different food units in Mercamadrid consolidated a marketing record reaching 2,712,383 tonnes of food, meaning an increase of 0.87% over the previous year

At the same time as the Madrid wholesale market is becoming consolidated as a reference point for local produce (100 km from source to the marketing point), with an increase in these foods of 3.1% compared to 2017, the food unit receives products from all over the world.

In the fruit and vegetable category, there are currently 38 companies that market these products (potatoes from Madrid, melons from Villaconejos, plum tomatoes from Aranjuez, Castilian purple tomatoes, etc.). The sources are mainly located in the provinces of Toledo, Madrid, Avila and Guadalajara. During 2018, amongst the local produce onions, mushrooms, garlic, broccoli and Swiss chard also stood out.

The paradox lies at the other extreme, since the leading Spanish companies in imports also have branches in Mercamadrid: CMR (specialising in any produce, from tropical fruit to apples, passing through plantains), Cultivar (the top specialist in exotic fruit that also works with virtually all sources and produce), Frutas E. Sánchez (specialising in a wide range and with a varied assortment of apples from the southern hemisphere), Grupo Guerrero (with oranges imported from Israel and walnuts from California and France), Eurobanan (specialising in tropical fruit, banana and kiwi fruit) and many, many others.

Mercamadrid also represents the venue where the latest food trends can be found, from mini-vegetables to edible flowers. And the market alone is a supply hub for the catering industry and communities.

The most popular fruit and vegetables in order of importance are: potatoes, oranges, tomatoes, bananas, apples and carrots.

The strategic location of the market, surrounded by links to any point in Spain, turns it into the natural market for hundreds of businesses in other regions, as well as an important hub for the Portuguese market. The demands of 12 million people are served from Mercamadrid

The highest investment in 10 years

In recent years, investments have been made in modernising the installations, technology and services, for a yearly average value of 6 million euros.

To continue with this work, after the signing of the Sustainability Pact in 2016 with all the business representation bodies, a new waste management system has been consolidated. In 2018, 40% of the waste generated has been recovered, which has allowed the number of trips and waste transported to landfill to be reduced (1,618 journeys less in 2018; 4,874 in the last two years), reducing the carbon footprint that this process generates.

The replacement of the lighting by LED luminaires; the digitalisation of the regular procedures by the companies in the food unit, which reduces time and journeys; the contracting of energy 100% from renewable sources; or, the start-up of up to six charging points for electrical vehicles, are some of the actions carried out.