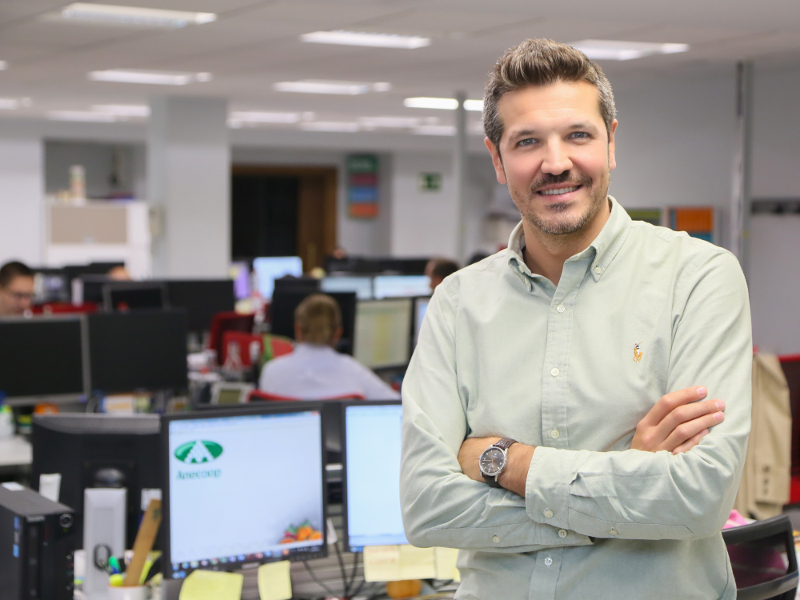 Fruit Today euromagazine talked to Carlos Nemesio, product manager at Anecoop. At the cooperative, they explain the reasons behind the crop’s downturn

What are the campaign’s main trends? Have the different periods of heavy rainfall affected it?

As opposed to a forecast of 180,000 tonnes, we have seen a 40-45% reduction due to the frosts in March and the hail in July. September’s rain has caused a slight delay in the start of the campaign.

Finally, the harvest forecast is of around 110,000 tonnes, of which we will be able to commercially exploit between 80 and 90%. Obviously, there will be a percentage of fruit that is not marketable and, with this in mind, the Grupo Persimon will only offer the best produce to the market.

Virtually all the persimmons we market hold the D.O. stamp ‘Kaki Ribera del Xúquer’ under our brand Persimon® Bouquet.

How could the campaign be extended in order to remain more in contact with customers?

Technicians from Anecoop and from the cooperatives that make up the Grupo Persimon are continuously working to extend the commercial calendar. Thanks to their progress, we have been able to move on from a campaign lasting one or two months to being present from the end of September-beginning of October until the first week of February.

We are studying other persimmon varieties, but they have nowhere near the organoleptic characteristics of the Rojo Brillante, which is Persimon’s® variety.

What promotional campaigns will be carried out this year?

Alongside the D.O., we will develop campaigns in France, Germany and Spain. Promotion in Canada and the United Kingdom has been cancelled due to a lack of volume. Moreover, we will complete the Persimon® Bouquet promotion with actions in Spain, France, Belgium, Poland, the Czech Republic and Belarus, coordinating with our subsidiaries outside Spain.

Does Anecoop consider it interesting to open up new markets that need specific protocols, for example the Chinese one? What negotiations have been carried out?

At Anecoop, we are always open to the idea of new markets. In fact, there are several applications in progress to be able to export to countries that are not yet open to imports.

We do not agree with making specific protocols because they usually involve greater bureaucracy and more expenses. It is better to work with import permits that include plant health requirements, allowing a flexible response to the demands of the different markets.

In the case of China, the application for import is “pending”. The authorities of this country only study one file at a time and at the moment they are working on the dessert grape protocol.

Has there been a downturn in persimmon plantations?

Yes. No new persimmons have been planted in Spain since 2015. The reason: mainly the disorganised oversupply, concentrated on one or two specific months and the continuous improvement in profitability of other products over the past 3-4 years.

Since then, the annual balance of persimmon surface area is negative, as it has been replaced by citrus fruits in the Community of Valencia and by berries in Andalusia.

In spite of this, in 2 year’s time, we will reach 700,000 tonnes per year. Will the current markets be able to absorb this amount of fruit?

Regarding the consumption per capita, there is still a margin for growth. However, in order to be successful, the offer must be organised, setting down joint, planned strategies that start with the production and continue to the marketing, passing through aspects such as quality and produce sales.

Do you consider that new markets outside Europe should be looked for?

Growing on the European market is not incompatible with the opening up of new markets, whenever the logistics and trade agreements allow the produce to arrive in optimum conditions.

In recent campaigns, the Persimon® Bouquet persimmon has reached Canada, Brazil and the Arab Emirates.