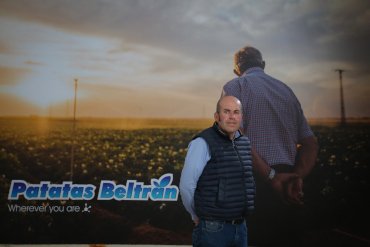 The new strategy by Patatas Beltrán involves becoming a high-quality supplier in potatoes for washing, particularly for the Spanish national market.

The company has strengthened their commitment in this line because, according to its Managing Director, José Beltrán, “we are aware that this is an unstoppable trend due to the supermarkets’ interest, which has been speeded up by Covid.”

“Currently, we produce high quality potatoes and we are suppliers for the main packaging companies. At present, the volumes of cargo for potatoes for washing in the fields are much higher and this is where we see our future. We are detecting that there is great concern for packaging Spanish potatoes by the distribution channels and, in certain months, this almost becomes a demand.”

The uniqueness and the strength of Patatas Beltrán lies in being the largest potato producer throughout Europe, with around 1,500 hectares sown between Albacete, Cartagena and Andalusia, and a storage capacity at its main plant of 10,000 tonnes. Beltrán has always been a strong supporter of Spanish national produce, and he states that “at present very good potatoes are being produced in Spain and the supermarkets have noticed it; therefore, this is going to be a rising trend.”

“I think that we have speeded up competition with French produce in the production phase, and in quality, yield per hectare, and guaranteed end product. Our clients have noticed this and the demand is increasing every day.”

The company from Alicante has diversified its activity and continues to be a reference for the frying industry, which, in spite of having suffered in the Horeca channel, has not been affected on the supermarket chains. It is also a license-holder of the Dutch seeds by Stet.

Amongst its most immediate challenges is the idea of growing even earlier varieties in the Campo de Cartagena and producing ‘second harvest potatoes’, which are sown in September and harvested in January.

Patatas Beltrán, located in the small town of Daya Vieja (Alicante), has experienced a continuous growth over the past seven years, and in 2021 it is celebrating its 50th anniversary in the potato business.

Beltrán does not hide his concern about the refusal to approve the anti-germinating agent ‘Dormir’, which is legal everywhere in Europe, except for Spain. “The different public administrations are passing the buck from one to another without solving the problem; therefore, we are losing business opportunities against the Europeans, who are authorised to use it.”

In spite of the fact that we still need French potatoes, greater value should be given to the national production, with its food safety and sustainability, because there are savings in CO2 emissions in the transport. “I think that today’s consumers are learning to discover these added values,” the executive concludes.