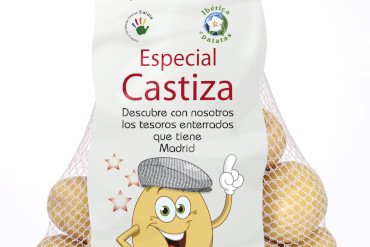 2021 has started off with lower potato crop forecasts in Spain, along with a clear trend towards bagged produce.

The Fepex Potato Committee predicts a drop in surface area of between 5% and 10% for the early varieties and 20% for the mid-season and late ones for the 2021 campaign.

These are the estimates that are being considered after finishing the sowing in the earliest producing regions such as Andalusia and Murcia. The descending trend for the north and centre of Spain has worsened by 20%.

The crop surface area, according to the MAPA Surface and Production Surfaces Advance for November, 2020, is 67,300 hectares with a production of 2.1 million tonnes.

A drop in exports and imports

The manager of the potato sector at Asociafruit, Marcos Román, comments that the earliest Spanish potatoes will start being harvested at the end of April until June, continuing with the harvest of the mid-season or late varieties in the central area of the country, particularly Castilla y Leon, at the end of spring and summer.

These reductions, as explained by Alfonso Saénz de Cámara, chairman of Fepex’s Committee, will not affect potatoes grown in the Basque Country, for which the forecasts are on a par with last year’s production.

With regard to the 2020 campaign, it has been seen that as a result of COVID, potatoes in supermarkets have sold well, showing a growth compared to 2019 and a clear trend towards buying bagged potatoes, as has occurred with all fruit and vegetables. The injured party in this situation was the Horeca channel, due to the long periods of closure and intermittent opening and closing periods, depending on each region. Some companies, located in the wholesale markets, very focused on the Horeca sector have also suffered from this drop in sales, but the ones that had a highly diversified portfolio have not felt the damage as much and have even obtained better economic results. The growth in loose potato sales continues to struggle on and has come to a standstill.

Consumption figures being handled by the Committee’s experts indicate that up to November, 2020, potato consumption in Spanish households grew by 16% compared to the same months of the previous year. This consumption per capita in 2020 was 23.7 kilos per person/year compared to 20.2 kilos in 2019.

However, some entrepreneurs in the sector show their scepticism regarding these figures and they emphasise that they do not believe that Spaniards are eating more potatoes, but rather there has been a transfer from the hotel and catering trade to the households because “we have been at home more, but this does not mean that potato intake per person has grown. It is very difficult to believe that someone who previous ate 1 kilo of potatoes is now eating 2.”

Fresh potato consumption in households up to November reached a total of 891.4 million kilos for a value of 885 million euros, which also meant a growth of 16% in the invoicing.

Categorical success of ‘Investment funds in the agro sector’

The mirage of water

6% more apples in the Southern Hemisphere

Europe, the tasty morsel: a record in citrus fruit imports

Minigu, a cucumber with its own name