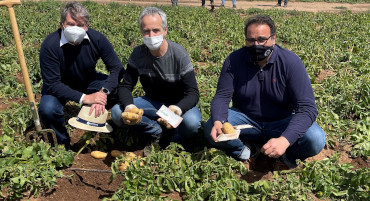 The Amandine Project continues to move forward and this spring it will reach another of its goals: selling new Spanish potatoes in France

Fruit Today euromagazine had the chance to talk to Jean Michel Beranger, General Manager of the Princesa Amandine Association.

When will the first shipments be sent and what volumes will be received in France?

We hope to make the shipments in a few weeks’ time, although this year will be a kind of pilot scheme because we will not export more than 100 tonnes. The new potatoes will be bagged by our French associate using the same parameters that we have been using in Spain. Next season is when there will be serious volumes for sale. The ultimate aim is to offer consumers the best quality produce and, at this point in the year Spanish new potatoes are very fresh, high-quality produce.

The launch and presentation of Amandine almost coincided with the start of the pandemic. In spite of this, it has continued. What differentiating elements does it offer? Are all the producing regions equally suitable for growing it?

Yes indeed, we presented it to the press in October, 2019, and several months later the pandemic broke out, but I must say that, in some aspects it was detrimental for the project, in others it wasn’t and the project has been very well received on the national market.

Currently, we are working with the most important retailers in the country, such as Carrefour, Alcampo, DIA, El Corte Inglés, Eroski, Ahorramas… and interest in the product continues to rise. In less than a year, we have reached 1,500,000 kilos in sales.

Regarding the producing regions, it must be said that all of them are suitable and we are producing in all the areas, from the earliest ones such as Seville and Cartagena to Castilla y León.

There are several differentiating elements of Princesa Amandine, but I would emphasise that it is supported by a single variety, which is suitable for 12 months of the year, a very highly valued aspect by the large retailers and the consumers. To this it may be added that it is the type of potato that the market demands today: low in calories, firm flesh, edible skin and suitable for healthy cooking (steamed, salads, etc.)

What advantages does a project as collaborative and cooperative as this one offer?

From the business culture point of view, I think it is an example for the entire sector because behind Amandine there are four companies that could be ‘competitors’ and that have joined together to pool their efforts.

A project of this scale has more economic resources; therefore, greater investments in promotion and advertising can be made. Now it is time for the association to be strengthened with the entry of new associates interested in the project.