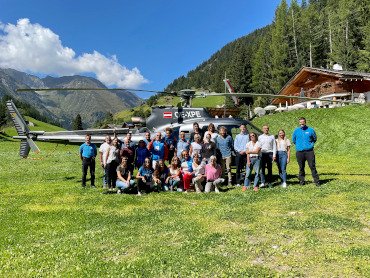 A new TV spot and a campaign featuring numerous initiatives explain how the South Tyrol’s unique climate and the passing of the year’s 4 seasons make its apples, known as “Daughters of the Alps,” so special.

“By means of sounds, images, videos and first-hand experiences, we want to share what takes place in Marlene® plantations during the transition from one season to another, in the alternation between heat and cold, rest and activity, which make our apples unique,” explains Walter Pardatscher, director general of the VOG Consortium.

September was the month chosen to set the new communication initiative in motion, featuring a new TV advert devoted to the four seasons.

The premiere was held at one of the world’s most famous venues, the Venice International Film Festival. The new spot, which took an entire year to complete, was filmed using an innovative directing technique. It manages to portray, in a continuous, free-flowing manner for 60 seconds, the transition from one season to another, thanks to editing without any cuts, full of spectacular shots and time-lapse photography.

The spot will be shown during the following months in Italy, Spain, Malta and Cyprus, both on the TV and in cinemas, in 15”, 20”, 30” and 60” formats. At the same time, an intense campaign will be undertaken in the media, which will include Out of Home channels; adverts in local and national magazines; digital advertising with posts and stories in Marlene® accounts; and videos on YouTube.

“The new spot is a natural continuation of the advert ‘Marlene, Daughter of the Alps,’ which was launched in 2017. We are going to reveal the universe of Marlene® throughout four seasons and carry out a series of initiatives aimed at making the uniqueness of our apples tangible,” adds Hannes Tauber, VOG Consortium’s marketing director. “We will show why our apples, for 365 days a year, enjoy the ideal weather conditions for enhancing the taste of all the different varieties bearing the blue label.”

With their own stories, the growers belonging to the VOG Consortium will take consumers to the very heart of their orchards during each of the four seasons. For her part, the South Tyrolese athlete and champion Dorothea Wierer will feature all the sports activities that can be enjoyed outdoors in South Tyrol during each season.

Art will also continue to accompany Marlene®. A new initiative will involve the short-listed artists from the 25th anniversary competition: the works that best interpret each season will be chosen as the packaging image for 3 weeks, in the corresponding season. Finally, there will also be activities at sales outlets with the installation of digital totems, showing the new spot, and the distribution of thematic gadgets.

“We’re prepared for another exciting season,” Tauber concludes. “Telling our consumers about all the details and nuances that are present in each season, and which make our apples so special and distinctive, is a thrilling challenge.”

A large group of Spanish and Italian journalists were invited for three days to experience first-hand the passing of the four seasons in this privileged European region in the north of Italy, nestled among the Alps and Alpine foothills between Austria and Switzerland.

These days, organised by VOG and Fruitecom, were an unforgettable experience full of surprises. One of the highlights was flying over Alpine glaciers in an Austrian helicopter.

The programme not only included leisure activities but also a visit to one of VOG’s cooperatives in Merano, and a practical lesson on how this exquisite fruit is harvested. In all the visits, we journalists were accompanied by a string quartet that performed the Italian composer Antonio Vivaldi’s “Four Seasons.”