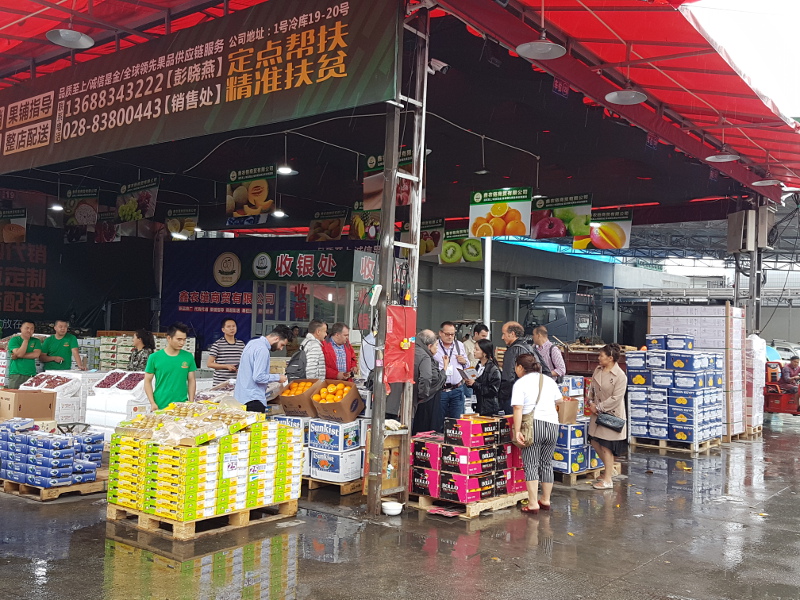 The Chinese experience was completed by three visits to wholesale markets, strategically located within the Asian giant

The wholesale markets in China have a specific influence on the distribution of fruit and vegetables that cannot be compared to the business structure in Europe.

The Jiangnan market, in the Chinese city of Guangzhou (Canton), is one of the largest wholesale markets in the world, with a surface area of around 400,000 square metres. Its size can be appreciated by its four-storey parking area for trucks, located in one of the buildings forming the market cluster. The busy traffic of forklift trucks, bicycles and any other type of vehicle puts the life of the most seasoned visitor at risk. The noise is constant around the entire perimeter of the market.

It holds a strategic position in the south of the country, close to the free trade city of Hong Kong and to Shenzhen, with an operating range that concentrates over 40 million people, in one of the regions that it is the most populated in the world.

Over 45,000 forty-foot containers pass through its installations every year with imported fruit. It is estimated that around 60% of the fruit imported by the People’s Republic of China enters the country through this market. Jiangnan is not merely a distribution centre, but more a gauge for the national market used to analyse the country’s demand and set the prices of imported fresh fruit. Fruit imports from Hong Kong are still important, but they are currently showing a downtrend.

The high turnover of produce in a market of this size balances out the lack of cold storage rooms as used in Europe.

This city is located in the central-south eastern area of the country, almost in the foothills of the Himalayan Mountains. It has around 10 million inhabitants and has become the fashionable capital for young people, and an important area of influence in this part of the country.

There are around 6,000 fruit and vegetable companies in its market and its volume exceeds 10,000 tonnes every day. The market makes up a city in itself, and it is equipped with the latest screen control technology, as well as a modern auction hall.

From its location, it serves an enormous proportion of medium-sized cities (in China, medium-sized means 5 million inhabitants); therefore, the road logistics are vitally important. However, although there are extensive, modern road networks starting from Chengdu, the use of refrigerated transport causes problems due to the lack of professionalism of the refrigerator companies themselves, which mean that second and third category cities are not supplied with fruit showing sufficient quality.

In the Eastern area of the country, Shanghai makes up the second most important market for imported fruit. Northern importers prefer Shanghai to Guangzhou due to the lower transport costs for the inland markets. The transport price for a 40-foot container from Guangzhou to Beijing can reach 2,280 dollars compared to the 1,400 dollars it costs from Shanghai to Beijing.

Shanghai is a well-structured market in terms of offices and work areas, with several buildings where some of its most important importers are located.