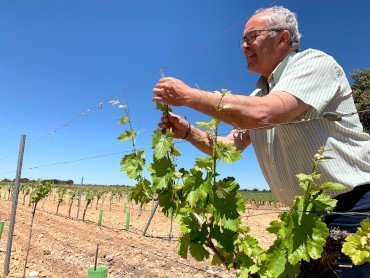 Old vines considered to be dead that sprout again and give abundant harvests, or young olive trees that grow in an exceptionally healthy way due to a natural protection against fungal diseases such as Fusarium or Verticillium. This is what is happening in many production areas of Andalusia and Castilla-La Mancha, where an increasing number of producers are applying a new approach against fungal diseases transmitted through the soil. Trianum is changing the traditional way of doing things in olive and vine crops. This effective biological fungicide developed and marketed by Koppert España is showing its enormous benefits in all kinds of soils.

The excellent results obtained in the fields have increased word of mouth amongst farmers and in record time Trianum has become the greatest ally of vine-growers and olive farmers due to its many benefits derived from its original action method. Its secret lies in an exclusive strain of the beneficial fungus Trichoderma harzianum. Trianum takes very little time to colonise the roots, giving the plant a protective layer against fungal pathogens. Additionally, it contributes to recovering the natural biodiversity, aiding the absorption of nutrients and water to a large extent. “We have found many cases of producers who have used other solutions without obtaining the expected results. With Trianum, they have seen the difference, because it acts from the first moment,” Jesús Perea, a technical advisor from Koppert in Toledo explains.

As opposed to other beneficial fungi, it has the widest temperature range in the soil: it remains active between 8-30 degrees. Its spores germinate and deploy all their protective action against pathogens within this temperature range. In addition to its high efficacy against soil diseases, it offers a high compatibility with most plant protection products that are commonly used in farming and it even allows in-tank mixing. It may be applied directly whilst sowing (granulated) or in soluble dust during irrigation.