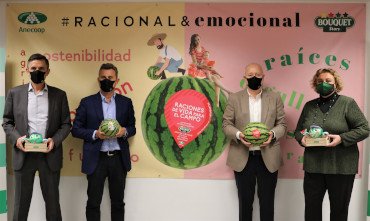 Anecoop is launching the watermelon season appealing to consumers’ emotions, with a multimedia campaign that wants to evoke a return to the most essential basics, such as the open air, sunshine, family and friends

The second degree cooperative and its producer associates that belong to the Bouquet watermelon programme, are reaching consumers again with the message, ‘Raciones de Emocion’ (Touches of Emotion), giving continuity to the ‘Raciones de Vida para el Campo’ (Touches of Life for the Countryside) that it launched last year and where it acknowledges the essential role of our farmers and the relevance of the countryside.

In line with the campaign, the chairman of Anecoop, Alejandro Monzón described last year as “a historical year, in which we have known how to work with the perfect balance: with our hearts in all the households, but with our heads and feet on the land that we cultivate. Emotion and reason.” Therefore, with ‘Touches of Emotion’ “we are appealing to the emotions of consumers affected by the ‘grey and black touches’ that we have had to live through.”

Since 1992, Bouquet watermelons have been present on the supermarket shelves of the main European distribution chains. As explained by the General Manager of Anecoop, Joan Mir, “the Bouquet watermelon is an internationally known brand with some well-defined values that refer to its growing and innovating sustainable agricultural production methods, taking into account not only the consumers’ preferences, but also the reality of the people who work and live in the countryside.”

He also pointed out that the Bouquet watermelon programme “talks about the integration of associates and cooperatives as business models that bring together growth, commercial articulation and international leadership. In short, a sustainable business model that takes into consideration all the agents on the chain of value.”

As indicated by the Sales Manager, Miguel Abril, this campaign will reach, “around 155,000 tonnes marketed in a total of 29 countries.”

With respect to the new developments within the Bouquet watermelon family, he recalled that last year Anecoop launched the Bouquet Premium, aimed at the high range segment, the good acceptance of which “has led us to decide to double the production of this reference, increasing from two to four million kilos.”

In the same way, he announced that “this year we have increased black seedless watermelon plantations, intensifying their presence on the market throughout the entire campaign.”

The visibility of this product on the international market is the result of the sales action unit, a strict quality control and the applied R&D+i. From its two experimental fields in Almeria and Valencia, in crops under glass and in the open air, the company continues working on improving the production processes, testing new varieties and new growing methods.

The cooperative will take on an intense communication and marketing campaign, which has meant an investment of 850,000 euros and will mainly have impacts in Spain, France and the Czech Republic, with actions in the press, on television, radio, social media, aerial advertising or collaborations with different European distribution chains.

In Spain, Bouquet watermelons will sponsor the programme ‘Pasapalabra’ on the A3 television channel, between the 7th of June and the 11th of July. It will also carry out a campaign with commercials on cable TV on the AMC Networks platform, with its main channel, Canal Cocina. On this channel, foodies will be able to enjoy the recipes by Loleta and Blanca Mayandía in June and July.

On Social Media, it will have a campaign with micro-influencers, with the well-known television presenter, Juanra Bonet, who will add reason and emotion to Bouquet watermelons on A3Media’s online platform.

The campaign will also have aerial advertising to reach the public on the beaches, which is also mainly planned for the national area this year.

The campaign will be complemented with an action aimed at radio listeners, radio mix and on an exclusive online environment with millions of unique listeners, who download their podcasts of favourite content using specialised platforms.

Without forgetting the collaboration line with inclusive sports which last year could not be 100% consolidated due to the pandemic, through the Fundación Unión Rugby Almería and the Asociación AVAPACE Corre.