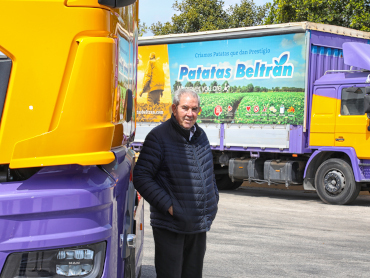 This year, the company Patatas Beltrán is celebrating its 50th anniversary. Its founder, José Beltrán, will soon be 79. His impetus, audacity and effort have led this farmer to create one of the best-known agricultural companies on the European potato scene

His pride and joy lies in the lands of Albacete, with production on over 880 hectares and 16 farms, to which the ones in Cartagena and Seville must also be added.

It is the first time that he is not present at the sowing of his potatoes in Albacete, as a long illness, from which he is now recovering, has prevented this. However, the accuracy of his work memories is surprising. He controls the dates, the production figures of any season, the yield of the land and any other anecdote to do with his work, in addition to listing all his old clients by their names.

When he was young, this heavily-built farmer was capable of unloading a lorry of 50 kg sacks on his back, by himself. And he did this not once, but many times.

Let us talk to this man, who lives and has lived for his business. He is a fount of wisdom in the world of potatoes because he knows it in depth from the seed potato to the table. 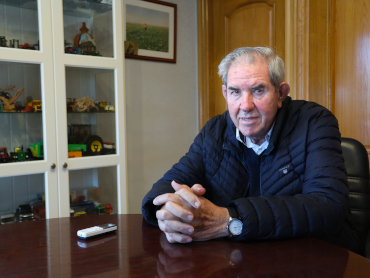 You have been the true architect and creator of Patatas Beltrán, How has the sector changed over these decades in your view?

It has been a very intense transformation. In the 1960s, Spain used to produce 270,000 tonnes and today we don’t reach 40,000 tonnes. For me, as a farmer, it makes me very uneasy, but everything changes and the only way forward is to adapt to it. The change went very deep when the first French distribution chains arrived, which to a large extent, were the reasons for the complete change, both in the produce and in the supply chain.

The year 1989 is very important for you

Yes, it is. It was the moment we started planting potatoes in Albacete, in Casas Altas. 35 hectares of the Kennebec variety. The following season we multiplied the hectares by 10, reaching 300.

I believe that the Beltrán bloodline is, above all, tenacious because your working career hasn’t all been a bed of roses

Very true. We have been through everything, both good and bad, but we have held on. On the 4th of September, 1990, a storm of acid rain completely destroyed a farm of over 150 hectares in Albacete. And the other farms that were saved didn’t end up in the best conditions.

In another campaign, we lost 5 million kilos because the potatoes froze. On their journey to the warehouse, the water poured out of the warehouse’s cabin as the potatoes defrosted. Even the jumbo labels rotted.

And in this same warehouse we have also had two important incidents: the flash floods of 1987 washed the warehouse away. And in 1998, it burnt down. 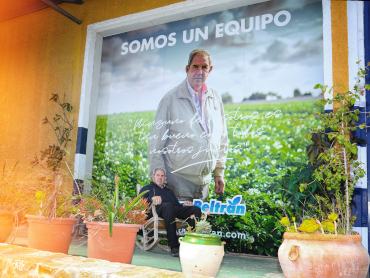 What has your production record been?

We reached it last year, with 41,700,000 kilos. Additionally, on a single farm we reached 98,000 kilos per hectare. In a region that is not traditionally a potato-growing area, such as Albacete, we have managed to obtain very good productions.

I am very proud of all the challenges we have faced over these 50 years. We have rented land where there was no water, our production has been burnt with herbicides, we have had disastrous harvests…. But we have persevered. Today we can proudly say that we our productions have overtaken the French ones, going from 40,000 kilos per hectare to 60,000, a figure that is higher than the one obtained by French farmers.

And in the financial area, I have always taken great risks, but I have been lucky to have the support of my family and everything turned out well. In 1982, I owed the bank 59 million of the old pesetas.

I remember a sentence you told me many years ago: “If I were younger, I would have emigrated to Idaho”

From a farmer’s point of view, there should be nothing better in the world than having land in Idaho and cultivating it. It is the world epicentre of a very advanced production process.

When did you first travel to Holland to look at varieties?

On the 26th of February, 1980, I went with a friend in a CX 25. The car froze, the hoses burst and we had to return to Spain, but our enthusiasm did not wane and we went back. My most up-to-date machinery came from Holland, where I purchased a harvester, a seed drilling machine and a hopper.

What are you most proud of? Will you return to see your land in Albacete this summer?

I made many innovative decisions at the time, opting for varieties that are very well-known today. I was the first person to sow Agria in Spain and I was also a pioneer in having modern harvesters.

Of course I will return to Albacete, with the goal of exceeding the 1,083 tonnes that we loaded in a single day last year.