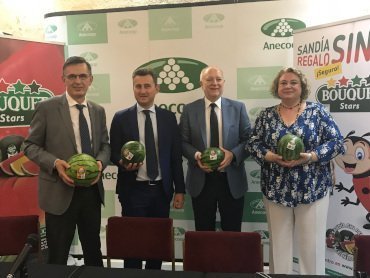 During 2019, Anecoop forecasts marketing 150.000 tonnes of watermelon, one of its star products, of which 80% correspond to the seedless watermelon, Bouquet

The production calendar starts off in April, in Almeria, and then extends to Murcia, Alicante, Valencia and Castellon. The productions from Seville and Castilla-La Mancha complete the campaign’s schedule. It uses some procedures to handle the entire process: from the variety selection, the agronomic handling of the varieties and the integration of the production, the diversification of the offer to the marketing itself.

Bouquet watermelons have been present on the fruit and vegetable shelves of the main distribution chains in 30 countries since 1991.

The trend towards a smaller size, with great internal quality, high range and flavour stand out in its evolution, making it into a reference for the launching of new varieties onto the market.

According to Miguel Abril, the company’s sales manager, “our goals involve giving priority to Spanish produce and trying to lengthen the campaign with varieties that continue to distinguish our quality in terms of flavour and colour, as opposed to produce from other sources. We are differentiated due to our greater freshness and a lower impact on the carbon footprint, as the transport is shorter.”

One of the most important keystones of the Bouquet promotion campaign is made up of a series of charitable actions that are integrated in the commitment acquired by the company to promote inclusion through sport. This social value is materialised in initiatives such as the collaboration agreement that Anecoop and the Almeria Rugby Union signed last November and that has led them to organise the 1st Bouquet Inclusive Rugby Festival.

The marketing campaign will mean an investment of close to 900,000 euros and it will have impacts in Spain, France, the Czech Republic, Belarus and Poland, with actions at points of sale, on the radio and television and social networks, aerial advertising, sporting events and meetings with the media.