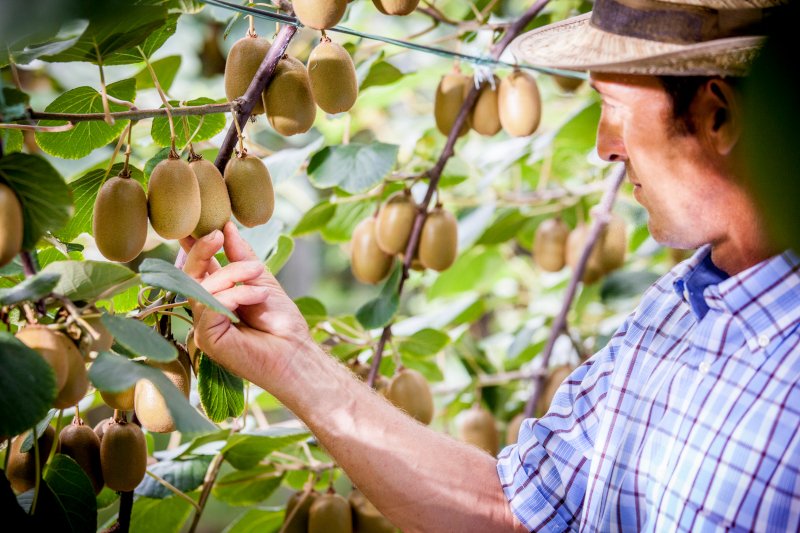 We have analysed the campaign and the main prevailing trend, marked by the colour and exotic notes

In the middle of December, the CSO announced the final balance sheet for the 2018 Italian kiwi campaign (second world producer after China), with figures that were lower than the initial September forecasts. After the summer, 373,475 tonnes of green kiwis were expected for the fresh market, but finally only 333,000 tonnes were harvested. Just 1% more than in the disastrous year of 2017, which means a 30% drop with respect to the average for the 2013/2016 period.

Fruit Today already confirmed this during a visit to the main companies in the sector in November, when the producers predicted that the volumes would be 10% lower than expected. The main reason has been the weather, with strong winds and rain in Lazio and Latina, which blew fruit to the ground and accelerated the ripening of most of the fruit remaining on the trees. Additionally, in Emilia Romagna, where size had been recovered compared to the previous year, farmers indicated that the number of units harvested was low. Added to all of this was the presence of moria and bacteriosis in several regions, a problem that is leading many producers to grub out plantations in regions such as el Veneto and to cultivate in other central-southern regions of the country.

The Italian campaign started late due to the high temperatures and from the beginning it suffered from problems due to the presence of fruit from the southern hemisphere, a source that has been in the news for more weeks than normal, although it is hoped that this scenario should be “more interesting” from January onwards.

Regarding other European producing regions, at the annual convention of the International Kiwifruit Organization, the stability of Greece was indicated, with volumes similar to those of 2017 (220,000 t), but with lower yield, therefore a shortage of product may be foreseen. News which, however, does not calm producers from Italy, who look sidelong at their neighbours and main competitors, aware that “they have good quality regions and lower production costs.”

Also, in Spain, the largest kiwi consumer with almost 2.8 kg/year per capita, the Greek fruit is penetrating the market strongly due to its low prices, particularly at the start of the season. And the fact is, as the Italian producers state, “they are more aggressive and as they lack cooling capacity, during the first 6 or 8 weeks they sell a great deal on the neighbouring markets.” In our country, the main producer is Galicia, followed a long way behind by other northern regions such as Asturias, but interest in the crop is growing in areas such as the Community of Valencia, for both national and foreign companies, where there are already around 150 hectares of kiwis. Here, the Italians give a warning: look out for any companies that cut unripe fruit. They could ruin the image of all the other companies in the sector.

With the small volumes from France and reduction from Portugal, the balance in the northern hemisphere is closed (excluding China) where the offer will drop from the predicted 732,000 tonnes due to the decrease in Italy, without reaching the +9% expected compared to last year. 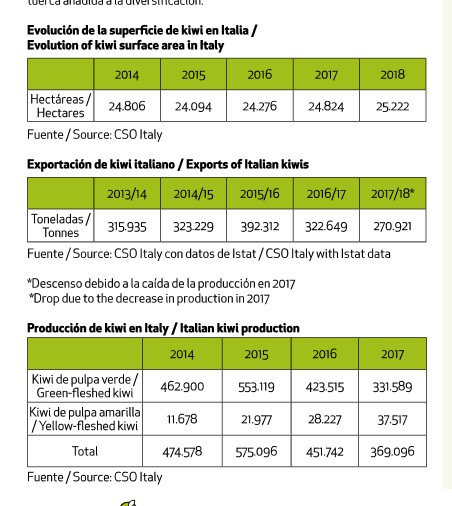 Although the Hayward is the unquestionable King of the kiwis, the yellow variety is becoming increasingly popular. So much so that it is already being confirmed that “over the next three years it will reach a third of the total kiwi production and it will be the keystone for the category’s growth.” This year it could exceed 60,000 tonnes in Italy and this will progressively rise with recently planted farms coming into production. There are many who think that it could reach and “even overtake” the green kiwi in a few years’ time. With a very different market, almost exclusively controlled by consortiums or clubs (with the exception of the Soreli variety discovered by the University of Udine, which is currently free and marketed with different brands), it has good prices and captures the taste of consumers who are avid for different products, with sweeter flavours.

The efforts for diversifying the segment through red-fleshed, exotic flavoured kiwis are also worth mentioning. There are already reduced volumes of examples on the market, but the clubs continue working to find ‘the’ variety. A material that works really well, not only organoleptically, but also agronomically, since at present the kiwi is more delicate due to its susceptibility to disease and short shelf life.

It is one of the most prominent trends, but it is not the only one. Plantations of kiwiberry (baby) can already be seen in Italy (Piamonte region) and in Spain (Extremadura). A highly niche product that is being used to give another turn to the screw of diversification.