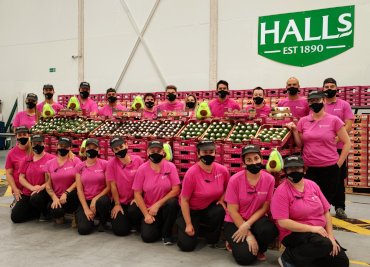 They operate in 8 countries (France, Germany, Spain, Holland, United Kingdom, China, South Africa and Peru with shareholders) and have 180 suppliers worldwide, featuring 22 source markets that supply consumers in 28 destinations. Founded in 1890, it is a well established agricultural business with over 130 years of experience and global sales of 30,000 tons. However, leaving such figures aside, what really defines them is their passion for quality and for doing things well at all levels, beginning with people. Halls’ family-like philosophy and values such as integrity and humility are conveyed to each member of its team. These are the same values that Christopher Cofré holds dearly. Three years ago, the then owner of the Malaga company Nature & Sens, SL, which worked for clients such as the French chain of gourmet stores Grand Frais, met Halls’ managing director for international , Paul Devlin. After starting with a commercial operation featuring mango in 2019, they continued with another involving avocado in 2020. These experiences and their common vision soon led to an expansion on the part of Halls. The company acquired Nature & Sens, SL in March this year, and the latter’s family became part of the multinational. This gave rise to Halls Iberia, a “beautiful human adventure,” which is how Christopher Cofré defines this new period as the subsidiary’s general director.

Halls Iberia is based right at the epicentre of Spain’s tropical fruit, in Vélez-Málaga. Now fully operational, in this campaign it will sell 2,000 tons of top-quality, fresh avocado and mango. The markets’ reaction has been spectacular. “Halls is respected all over the world. It has opened the doors to us to Spain’s wholesale markets and supermarkets and we’re now working on establishing an association of avocado and mango producers for the upcoming 2022 campaign,” declares C. Cofré. They currently produce on the family estate in Triana, smack in the middle of the Axarquía Tropical, and work with produce from other source markets such as South Africa (where its parent company is located), Perú, Kenya and Brazil.

They have recently started a new project in this country involving more than 900 hectares of production, featuring innovative and sustainable practices, as well as 50 ha based on an ecological model. Halls has created there an association with important agricultural producers, such as Bonella Group and Campo de Ouro with ACHM International as a third partner. Among this source market’s advantages, C. Cofré highlights its proximity compared to other Latin American countries. “We can ship produce to the European markets in just 15 days, which allows us to guarantee maximum maturing quality.”

Halls’ expansion strategy led it to form its own team in one of the markets with the greatest potential for tropical fruit, the giant Chinese one, with a sales office in Chongqing. The company forecasts that it could become one of the main avocado markets by 2025, in view of increasing consumer interests in this fruit. In the same continent, Halls is also eyeing other markets on the rise, such as Japan, South Korea and other East Asian destinations.