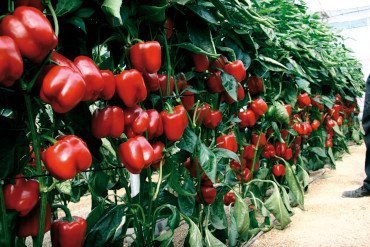 Greater vegetable health, lower costs for producers and greater quality of the fruit, in line with the demand by the distribution networks. These are the advantages derived from choosing the new range of pepper seeds from Rijk Zwaan. With Lt Defense as their common name, the company has developed 7 red California pepper varieties with resistance to powdery mildew and nematodes which will cover the entire transplant cycle from June to August. An advantage which, without any doubt, will benefit both conventional and ecological productions. “A lower incidence of fungi results in better development and as the crop is treated less, this reduces plant stress, encouraging greater yield,” explains José Luis Ruipérez, a specialist in pepper growing. Added to the abovementioned protection, there is also “an extreme resistance to cracking”, which encourages greater quality at the end of the campaign and an absence of silvering or skin separation.

When naming the varieties within the Lt Defense range, Rijk Zwaan has chosen names related to a musical theme: Nirvin RZ and Claque RZ are for early transplanting; Canzion RZ and Sibelius RZ, for medium cycle; and Percusion RZ, Acustico RZ and Trombon RZ, for late transplanting. All of them have an open plant habit, internodes that go from short to medium (depending on the variety), and they produce fruit that are consistent, uniform and with an attractive external appearance, both in colour and in shape.

With a gourmet seal

The seed company was present at the 2019 edition of the Madrid fair ‘Salón Gourmets’, where it continued to promote one of its most prestigious peppers, Sweet Palermo, the sweet cone with which the company achieved a milestone: creating a new category. This time, Rijk Zwaan came to the fair with ComFresh. Likewise, Sweet Palermo is added to the sponsorship of the Spanish Capital of Gastronomy, Almeria 2019, to showcase the high quality of the province’s produce.