I would have never guessed that Nuria Martínez (Madrid, 1976) was a CrossFitter. She has been doing it for over a year now and she admits that, for her, it is more of a mental challenge than a physical one. 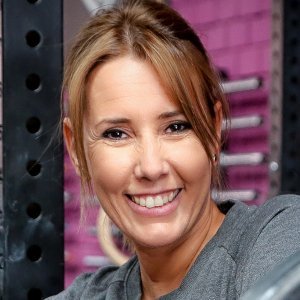 I would have never guessed that Nuria Martínez (Madrid, 1976) was a CrossFitter. She has been doing it for over a year now and she admits that, for her, it is more of a mental challenge than a physical one.

We arranged to meet somewhere for a snack and to take some photographs before her CrossFit session. Her all-time favourite hobby is travelling and we decided to go to the Parque Europa, in Torrejón de Ardoz (Madrid), which is full of replicas of the most emblematic European monuments.

She is a woman of many social skills, and this can be seen very quickly through her great commercial sense, which she developed in her parents’ greengrocers.

Those who know her are aware that she is completely in her element in front of a camera. Her eyes light up when she sees one. Therefore, I trail behind her, rushed, asking her about things between shots, which she plans herself.

Don’t you think that this trend of taking a selfie on every corner is the maximum expression of narcissism?

I am like a teenager in this aspect. I don’t look at it or think about it, because it doesn’t matter how I look, I just upload it. I admit that in the beginning I was more worried about looking pretty in the shots, but I got over that phase a long time ago. The only point that I have to admit is that I have two lives: my virtual one and my real one, and I don’t want to lose either of them.

I envy how photogenic you are. Many years ago, I read an interview by Judith Mascó in which she admitted that the muscles of her face worked in a special way, moving from a ‘not photo to a photo’ look. I think you must be the same because I have seen you thousands of times reaching out your arm, smoothing down your hair, with a selfie smile.

Ha, ha, ha. My brother said the same on Sunday. We were eating paella and I shouted: “Photo!” And my brother commented: “You see a camera and there goes your photo smile!”

I must have something, because I get really uptight if I don’t have my phone nearby, as if a part of my body was missing .And if my battery runs out, I get overcome by anxiety.

We have met up in this park because you love travelling and it is a representation of Europe. Do you know Europe well?

Yes, I have visited virtually all the main European capitals in one way or another, working, as a tourist and when I was younger, with a backpack travelling from the Baltic countries to Prague. For me, Europe is like being at home. Of course, when I come back, I appreciate Spain more.

What was your last international destination? And your next one?

The last one was New York and the next one will be Costa Rica, with a friend. I have been to almost all the countries in South America. I have also been to Jakarta and New Zealand, but I have yet to go to Africa. It’s on my list.

You have been doing CrossFit for just over a year. What did you do before?

I have done a little of everything. I am very restless and I will sign up for anything. I have been dancing bachata, kizomba, meringue and chachacha with a group of friends at the weekends for over ten yours now. We might start at 7 pm and end at 1 am. As I don’t drink any alcohol because I am teetotal, when my feet start to hurt I take French leave and get in my car and go. My friends are used to this.

At one time I had a partner who went hiking and I joined in, but the relationship ended and the hiking went with it.

And another of my crazy ideas (this time my own), was to sign up to a skating class. I hadn’t tried it before, but I reckoned I was going to like it, so I went out and bought all the skater accessories: knee pads, gloves, hair band, rucksack and Pro skates. I didn’t miss out a single detail, well one: learning to in-line skate. I had three hard falls on the first day and sold everything on Wallapop. Since then my mother calls me “Barbie accessories”.

It could be said that you were born and bred in your parents’ greengrocery. I suppose that you have selling skills.

I was so small they put me on a box so that I could reach the counter and I did my sums on brown paper. I already showed promise then. I don’t remember, but my mother used to tell me that one of my jobs was to weigh three kilos of potatoes using the steelyard balance and put them in bags to have them ready. At that time, selling was very different. She told me the guidelines and she said that I should always get as close to three kilos as possible. When I couldn’t find the right potato, I would cut one in half and put it in. Imagine her annoyance when she discovered that instead of changing a large one for a smaller one, I had had the great idea of cutting one up.

I always loved going to Mercamadrid with my father. There are older people at the market who have seen me grow up.

After having a snack and walking around the Parque Europe, we go to the industrial estate where the “Sweet Death CrossFit” box is located, managed by one of the most brilliant European athletes: Rita García, a winner of many awards and a professional in this discipline.

Nuria, why don’t you choose a group class in a gym rather than grinding away here?

There is just no comparison. CrossFit is a constantly varied, very high-intensity functional training. The community plays a very important role because they shout at you and encourage you when you can’t get through the last rowing exercise. There is no room for boredom. The WOD (work of the day) changes every day and is put up on the blackboard.

The first time I did it I was stiff down to my toes, but it gives you a great sensation of fighting against your own weaknesses and it makes you feel amazing because you have managed to do it.

What is your PR (weight lifted)?

It depends on the exercise, but in Black Squats (squats with weights) it is 55 kilos.

I don’t think I can even lift an eight kilo kettlebell! Which is your favourite exercise?

Without any doubt, rowing, but this isn’t just any old rowing. When I get to the last movements I always hear my trainer’s shouts: “Come on, you aren’t in the Retiro park with the ducks”. Then I rebel against her and finish.

Which is the most difficult exercise for you at present?

Umph, I still have a great deal to learn, although I am beginning to break through some exercises such as the Box Jump, which to begin with, made me panic, or the ones that before I couldn’t do even one, but that now I can do 4 or 5 without getting off the bar, but my personal challenge is to manage to do Handstand Push Ups.

I have heard the term ‘HIIT’ several times. What does it mean?

They are 20 second rounds of exercise, followed by 10 seconds of rest and then you start over again.

Diet and exercise go hand in hand. Outside the gym, how well do you cook?

My ceramic hob is pristine, in the same condition as the day it was installed. I am completely useless in the kitchen. I bought a Thermomix and I sold it the following week to a friend for half the price. My partners have been good cooks, so I’ve been lucky; and I still am, because my father prepares me some dishes to eat during the week.