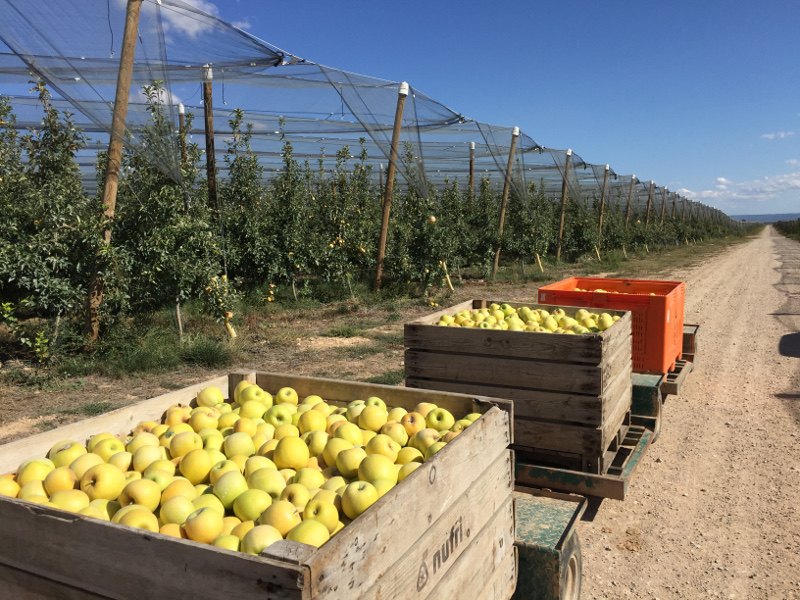 The Opal apple, from Central Europe, will strengthen its production in Southern Europe

The start of production from new Opal plantations in Italy and Spain will mean an important rise in volumes over the next few years.

This apple variety is relatively new in Spain, and its main productions are found both in Catalonia and in Aragon. Most of them are now entering their third or fourth year of production.

“Spanish consumers appreciate the good organoleptic quality of Opal apples and we are sure that our fruit has a great future,” Jackie Feniello, sales manager from Nufri, one of the two operators which, along with the company Orchard Fruit, hold the licence for marketing Opal, explained to Fruit Today euromagazine.

In general, the 2018-19 campaign is bringing good sensations regarding the high sugar content and the excellent texture maintained by the Opal apple harvest. On the other hand, and contrary to what happened in the 2017 season, the appreciable increase in volumes (this year 3,200 tonnes are expected to be reached in Europe), will allow the supply period to be extended, as well as guaranteeing the product demand.

Most of the volume will be produced and distributed by Greenyard Fresh UK in the United Kingdom and by San Lucar in the continental areas of Germany, Austria, Styria and Lake Constance. However, the progress Opal will record in Southern Europe (Italy and Portugal) over the next few years is worth mentioning, since the recently planted trees will then come into production. This is endorsed by Michael Weber: “Production is moving towards Southern Europe, since it is a variety that stands up to heat well and ripens after the Golden Delicious, an apple that acts as a reference point in these countries,” the executive explains.

Furthermore Weber comments: “There is a reality that should not be ignored or underestimated: climate change, which will make producers locate new plantation areas with greater adaptability to the stress caused by heat waves or droughts.”

One of the important challenges for this apple over the next few years will be how to tackle its differentiation at the point of sale, as many of the purchasers believe they are looking at a very ripe Golden Delicious. “The key to this apple is its texture and crunchy bite. I think that once they have discovered these attributes, consumers will not be worried about the colour, but this does not mean that Opal will not need promotional activities for its differentiation, an area we have already started working on.”

Another of the distinctive attributes of this variety is the limited oxidation of its flesh, which after being cut keeps its colour and therefore, allows it to be used for other areas, rather than just selling the produce fresh, such as the pre-prepared range or as juice.