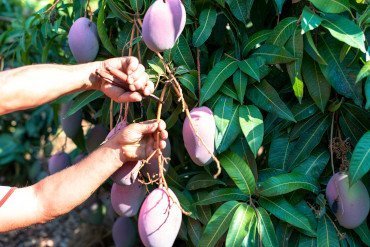 TROPS is celebrating its 40th anniversary this year, and it has launched an important campaign to promote mangos, starting in September and October, that will carry on over the next 5 years, with an important financial investment, which this year alone will reach 17 million people. “The time has come for the general consumer to discover it,” the chairman, José Lorca, announced during the presentation on the 13th of September in Malaga.

Under the title “The King of Mangos”, it is aimed at those responsible for the household shopping, using 10” and 20” commercials on national television channels and 45” spots in prime time programmes such as Ana Rosa, Sálvame and Viva la Vida, where the excellence of mangos from Malaga will be explained. They will also use the internet, with 2 points of action: On-demand TV, with videos in series and formats that the target public can relate to, and Social Media (Facebook and Instagram), in addition to traditional actions for reinforcement at the points of purchase (signs and muppies in markets, supermarkets and Spanish wholesalers such as Mercamadrid, Mercabarna, Mercamalaga…), along with inserts in the specialised and generalised press.

Trops holds the largest mango market share in Spain, covering over 50% of the national production. In 2018, they marketed over 15,000 tonnes of national mangos in the main European countries.

The company has always been committed to a top-quality product such as the Malaganian mango which, as opposed to mangos grown in other areas, is harvested at its optimum point of ripeness, enhancing its exotic aroma and flavour.

TROPS was established in Velez Malaga on the 8th of October, 1979 and today it groups together over 2,800 farmers, located in areas ranging from Castellon to the Portuguese Algarve, although most of their production is concentrated in the provinces of Malaga and Granada. It is the first Andalusian Transnational Producers Organisation and it has a production and marketing share of around 40% in avocados.