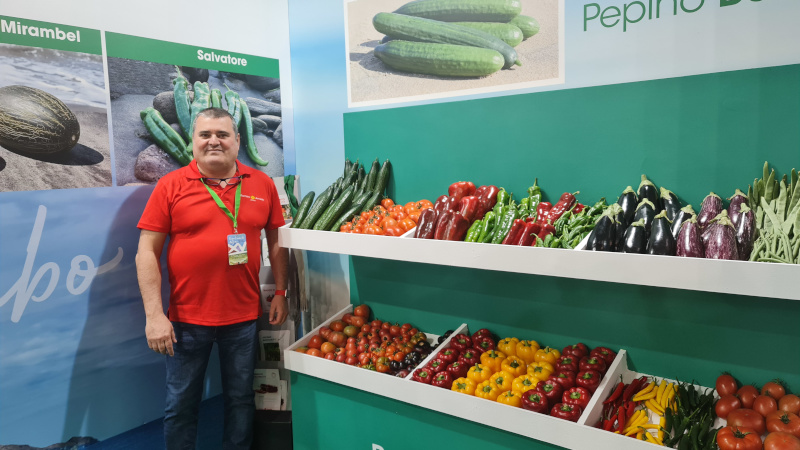 Ramiro Arnedo is responding to demands by the producers from Almeria with its new cucumber and pepper portfolio. As indicated by Pablo García, a sales technician from the seed company, “our cucumbers meet the premise requested by the producers, bringing four-fold resistance: to yellowing, to vein yellowing virus, to downy mildew and to CGMMV; and in peppers all our varieties are resistant to downy mildew.”

In cucumbers, the company has already presented the early variety Bastian with four-fold resistance. It is indicated for transplanting from August and the first week of September and in the spring, from the end of February to the end of March. The fruit measure 30 to 32 cm, with marked ribbing and good filling.

With regard to peppers, Ramiro Arnedo is making an important commitment to the Menes variety, a red California pepper with resistance to downy mildew for transplanting in greenhouses from the 20th of June to the 5th of July.

In the Lamuyo segment, “the main new development this year” is Quijano, for late cycles (transplanting from the second fortnight of July). The plant, with medium-high robustness, produces medium, red-coloured fruit, 18 to 20 cm long.

Finally, there is Salvatore, an Italian pepper for late transplanting in Almeria during the month of September or spring transplanting at the end of November. Its fruit are a deep, bright green, 20-22 cm long and with medium roughness.

Ramiro Arnedo is participating in the innovation project PROTEINLEG, to develop high quality food proteins through the sustainable production and processing of leguminous crops. This project has been conferred within the supra-autonomous operating groups.

Alongside the company, the Fundación Empresa Universidad Gallega (FEUGA) and MIMIC Seafood are taking part. The latter is a start-up devoted to obtaining food based on vegetables, amongst others.

The project has 80% co-funding by the European Agricultural Fund for Rural Development (EAFRD) and 20% by the MAPA, according to Marisol Arnedo, Head of R&D at Ramiro Arnedo. The total budget rises to 556,947€.

PrevSakata grows stronger in Almeria
Voltz Maraîchage, in the heart of the countrysideNext
YOU COULD ALSO BE INTERESTED IN