Not everyone knows what it takes to sleep 100 metres away from an American black bear and not be attacked. Michael Brinkmann, the new CEO at SanLucar, does. 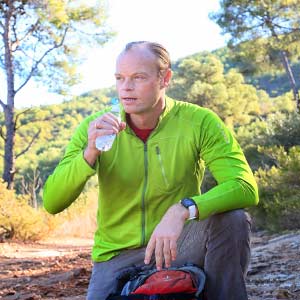 Not everyone knows what it takes to sleep 100 metres away from an American black bear and not be attacked. Michael Brinkmann, the new CEO at SanLucar, does. His passion for nature comes from his childhood, when he spent the summers on one of the islands in the North Sea, close to Bremen, where he was born in 1977.

He studied Business Management and finished his MBA in the USA. Married to a BM graduate, with a PhD in Entrepreneurship, both of them share the same hobby. They spent the three months of their honeymoon with backpacks and a tent, travelling through villages and little-known routes in South America, where seeing a 2.03 metre tall white man  caused a sensation.

Michael is a pleasant, cosmopolitan man, who has lived in South Africa, California and France, and has now spent the last five years in Spain. When I interviewed him, he had just arrived back from a holiday in Argentina, with his 3 children, aged 3, 6 and 8, to whom he is also instilling his deep respect towards the environment.

We met up at the company’s new installations, which to me seemed to have been designed in line with the mentality of the man who I had started to interview. I was in a sustainable building, flooded with light and blinds that opened or closed as the sun’s path crossed the sky. Everything was white, imposing and with enormous vertical gardens.

We went from there to the Sierra Calderona to travel the route he usually jogs two or three times a week, when he is not away on business.

How long does this morning route through the mountains take you?

I usually leave home at 7.30 am and I estimate it takes me around 6 or 6 and a half minutes per kilometre because it is a rocky area. The sun comes up at 8.15 and I can see Valencia, the sea and the Roman town of Sagunto.

Travelling so much, I am sure you are bound to have experienced dangerous situations.

Perhaps the worst situation was in Canada, alongside my best friend, when I was in my early 20s. We were camped on an island we had reached by kayak and I cut my hand badly with an axe when I was trying to chop wood. The nearest town was four days away and it was just impossible for us to leave the island without both of us rowing and obviously, I couldn’t do this. We had to wait on the island for several days until I could just about row again. I still have the scar.

I am usually the cautious type, and try to find out about the dangers of a place. I have kayaked in Patagonia, but I was very aware that if we capsized, just a few minutes in the water were enough for us to die of hypothermia, as happened to Douglas Tompkins, the founder of NorthFace.

What is the trick to ensure that a 200 kilo carnivore such as a bear does not attack you?

It consists of changing the clothing that you were wearing while you ate your dinner and leaving it, along with the food, in a tree. The bear will go after it and will leave you to sleep happily in your tent.

I suppose that now, if you are travelling with your children, you will overcompensate for the risks.

Obviously, but this does not mean you can’t reach distant places. Just now, in Argentina, for six days we were in a region where we had no internet connection or electricity. We lived using the daylight hours and from seven in the evening, we used a generator to be able to have dinner and shower.

Tell me, what is the essential object to keep in your backpack?

A Swiss army knife. It can save you from many situations.

What would you take to a desert island?

My wife and my three children. They all come in a pack. I would also take a few bottles of some German wine as Riesling and some Valencian red wine such as Les Alcusses or any from the Bodegas Hispano+Suizas. (Laughter)

What is the southernmost point of the American continent you have reached? And the highest place?

I have reached Punta Arenas in Chile, a place that is on the Strait of Magellan, where the Pacific and the Atlantic meet up and just 1,000 km from the Antarctic continent. And the highest point was the 4,800 metres that are reached on the Salcantay route to Machu Pichu and that takes 5 days and 4 nights and is catalogued as one of the five best treks in the world.

Will my grandchildren and yours get to know the penguins at Punta Arenas or the whales in the Antarctic?

I hope so, for the sake of mankind. We are still in time to act to save the planet.

What is your bedside book at the moment?

It is a book by the writer Susan Abulhawa, called ‘Mornings in Jenin’ that tells the story of a Palestinian family. Last year we travelled to Israel and Palestine and I am interested in discovering the conflict from both points of view. It is along the same lines as ‘The Kite Runner’ by Khaled Hosseini, which tells of the Soviet invasion of Afghanistan and that I also liked a great deal.

Your height makes you perfect for playing basketball.

Although I have played basketball, my favourite sport is volleyball, and I can now play it on La Malavarrosa beach. Everything has its good points and its bad points: in my profession, being so tall means being uncomfortable on planes or asking for beds without headboards in hotels, or if there is no other alternative, sleeping diagonally. (Laughter)

What do you usually do at weekends?

I mainly enjoy the company of my wife and children. The children have very busy social diaries with ball parks, birthday parties, etc. If we can, we escape to somewhere in Teruel. And we also have many friends who visit us or whom we visit. We are very active; we don’t usually get bored.